A History of the Peninsular War, Volume II: January to September 1809: From the Battle of Corunna to the End of the Talavera Campaign by Charles Oman


There isn't really much I can add to the praise I have given to the first volume of this seminal work about Peninsular War. Extremely detailed, meticulously referenced and written in very accessible style - as long as you have a genuine interest in the topic, it is pure pleasure to read Oman's account of this conflict.

If I would choose to nitpick, then my only reservation would be in regard of Oman's almost absolute support of Wellesley's generalship. I would suspect that not everybody will agree with author's undeniably pro-British stand. That is however question of possible differences in opinions between the author and the reader and doesn't take away from the high quality of work in this book.

View all my reviews
Upplagd av Minondas No comments:

Troops, Weapons & Tactics or TW&T is a ruleset for low level combat during World War 2 from one of my favorite game designing companies, Too Fat Lardies. If you are thinking “But Too Fat Lardies already have published a rather popular ruleset for low level combat during World War 2, it’s called I Ain’t Been Shot Mum”, then you are correct. What’s more, if you after a quick glance at the contents of TW&T say “Heck, this reminds me of IABSM quite a lot!”, you will also be 100% correct. The fact is that it is hard not to regard TW&T as a very close sibling of IABSM and those who are familiar with IABSM will immediately feel right at home with TW&T.

TW&T and IABSM - what’s the same?
For those not familiar either of the two rulesets, here’s a quick overview of main features shared by both of them:

TW&T and IABSM - what’s the difference?
As far as I can see, there are three things that make TW&T into a beast that is significantly different from IABSM.

The first of those differences lies in the way infantry units are represented on the table. Both rulesets try to depict low level engagements, with squads as basic manoeuvre units. However, in IABSM the representation of units is rather generic - a platoon consists most often of three or four squads, with no distinctions between them except perhaps number of soldiers in each of them. In TW&T, the platoons and squads are modelled in much more detail. Platoons consist not only of its squads; their HQ and support elements are also represented as separate entities. Squads are split into their sub-elements (most often squad leader as a Big Man, a rifle section and automatic weapon section). Squads of different nationalities can therefore be differentiated better than in IABSM. For example, German squad with MG42 LMG and bolt action Mausers has different characteristics than American squad with M1 Garands and a BAR as squad support weapon. Thanks to the higher “resolution”, players can now act more realistically with their squads and apply same doctrines that were used in real life.

This low granularity of TW&T is also reflected in changes of the card activation system. In IABSM, a card usually activated an individual leader or a platoon, thus allowing the user to act with all of its squads at once. In TW&T each squad has its own card.

Role of Big Men in TW&T is very different from that in IABSM. In IABSM, they are an abstract construction derived from qualitative differences between command&control of different units. Those differences are handled mainly by making different number of Big Men available on the table, but the ruleset does not attempt to recreate real command structures. In TW&T on the other hand, Big Men are directly anchored with “reality", so number of officers and NCO:s (i.e. Big Men) on the table is exactly the same as it would be in real life. Each squad has its own leader, each platoon has a platoon commander and so on.

The “improved realism” of command structure in TW&T doesn’t end with correct depiction of command structure. Each Big Man in TW&T is graded in four levels, with level 1 being the lowest. When Big Man’s card comes up, he is then able to perform at minimum one, but possibly more actions in that turn. Actions available for Big Men can be split into two groups - personal (such as moving from squad A to squad B, directing fire of a machine gun or giving a pep talk to a rifle section under heavy fire) or unit activations (making them use their dice for spotting, shooting or movement). His chance for multiple actions and how many of them will be available at the time his card turns up are decided by his level in combination with luck in the draw of cards. I won’t go into details of this game mechanism, but I must say that it is rather ingenious.

Last noticeable difference in TW&T when compared to IABSM lies in the fact that when a unit card comes up, it can shoot and spot, but is only allowed to move if it is activated and ordered to do so by appropriate Big Man. In other words, squads cannot normally move on their own initiative. This seemingly small change, in combination with the way Big Men operate in TW&T, has in my opinion dramatic implications on the gameplay. In fact, I would like to go as far as saying that thanks to the introduction of this restriction, the “missing link” of IABSM has finally been put into place.

Let me explain what I mean. My understanding is that the main purpose of Big Men both in IABSM as well as in TW&S is for them to act as a motor providing the momentum for the units under their command. This goal (once again in my humble opinion), was never fully achieved in IABSM, mainly because of the limitations imposed on Big Men in that ruleset. However, in TW&T the Big Men are not only the sole “source” for unit movement, but what’s even more important, the differences in leadership quality of different Big Men also have a direct impact on reaction speed and degree of coordination between different units on the table.

Testing the new ideas
Characteristics of TW&T described above had a huge impact in the test game that T. put together for us last Sunday. The idea was to have two squads of British infantry make a sudden raid on a German communication bunker defended by a small garrison of second rate troops. British side had two leaders, one of grade 4 and one of grade 3. Their opposition consisted of second grade platoon with three squads without any automatic weapons, an MMG position and a couple of AA-guns. They were led by four Big Men, all of grade 2.

Our small test run turned out to be a perfect illustration of TW&T:s strenghs. Despite being inferior in numbers and being activated less often, British platoon was able to coordinate its actions much better than the Germans and overwhelmed opposing units with fire and manoeuvre one unit at a time. It also became clear that the activation system for Big Men has a bit of a nasty streak built into it - because of the way that game mechanism works, Big Men of higher grade “soak up” possibility for multiple activities for their counterparts of lower grade. This fact put the Germans at additional disadvantage, because German Big Men never had a chance to grab initiative (in form of multiple actions) and form a coherent defensive line before their individual squads were defeated. 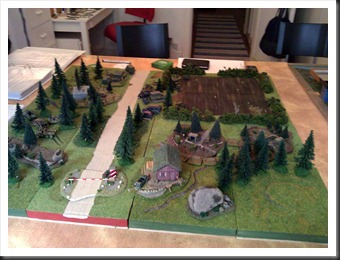 Not the best picture quality, had to use my mobile phone 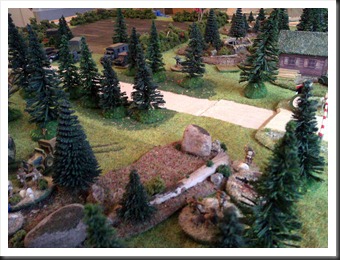 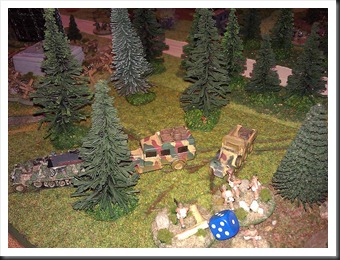 Different strokes for different folks
My personal first impression of TW&T is mostly very positive. First of all, I am a huge fan of the stuff that comes from Too Fat Lardies and I always liked IABSM, even despite the flaws that I see in that ruleset. TW&T follows in its predecessor's footsteps, but manages to avoid the issues that always bothered me when I played IABSM. Overall, the game design of TW&T seems slicker and more coherent to me than that in second edition IABSM.

T. on the other hand didn’t like TW&T at all. His opinion was that the increased detail in depiction of the squad structure and its equipment didn’t contribute much to the fun, but made the game “plotty” and slow. He also expressed a worry about games demanding too much time and frequent down-times for “not active” players, especially in larger games. His objections against Tea Break card also remained unchanged (even though we played with two of those cards in the game deck).

In other words, the verdict over TW&T seems to be a one to one split decision. Considering the fact that I currently don’t have neither figures nor terrain for WWII games, I probably won’t have opportunity to play more of TW&T for at least a good while. But it may very well be so that TW&T will be the final straw that breaks my resistance against ordering a bunch of those 10mm Pendraken minis I’ve been glancing at so often over last couple of years.

Another painting project, in yet another scale? Oh…. thanks for that one, Too Fat Lardies! :-)