Since this article is a ‘pure’ review of a commercial product, let’s start with the mandatory declaration of independence – I am in no way associated nor sponsored by Timecast Models. Thus, this review is an expression of my personal opinion as private consumer and wargamer.

Allright, with these rather official preliminaries completed, let’s get on with it.

Couple of years ago I’ve decided to ‘migrate’ my terrain from GHQ-s styrofoam hexagons to ‘conventional’ DIY terrain boards. Major reason for this move was my wish to simplify the setup and keep as much of it (hills, woods, rivers, ditches, hedhes and so on) as removable, flexible stand-alone pieces.

At the same time, Timecast Models released their roads and rivers system, made out of silicone rubber. That in itself wasn’t anything spectacular, many companies make similar terrain pieces. But two things caught my attention in regard of this particular product range. First, Timecast Models made rivers came in four different widths that could be connected together with dedicated ‘connector’ bits into integrated waterway system. Second, Timecast complemented their product with variety of resin bridges and fords. In other words, their product line struck me immediately as a complete and expandable solution for waterways. And that, ladies and gents, isn’t something one can often say when it comes to wargaming terrain.

My first (and so far only) order included enough straight and meandering river sections of smallest width to provide continous river of about 2 meters. I’ve also ordered all available sets of fords, connecting bits and river bends. Samples of what came in the box are shown below. 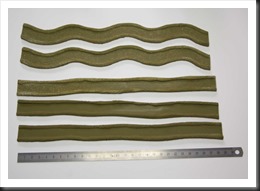 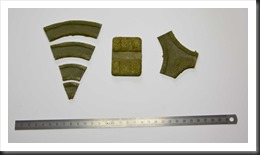 As can be seen in the pictures, the rivers and fords are made of brown, flexible rubber-like material. You can easily cut and trim individual pieces with a pair of scissors.

Before painting and flocking, I washed the whole lot in lukewarm water with some dishwasher detergent. Every bit was gently scrubbed with a toothbrush, rinsed in cold water and left to dry. It was probably a bit of an overkill, but better be overly cautious than running into problems later on with some chemical residues left-over from mouldning process messing with the paint.

On with the painting then… I kept things extremly simple here and started with painting the riverbanks with dark-brown acrylic wall paint from Flügger. Water surface was painted with dark-blue acrylic artist’s paint from Amsterdam. I know, I know, not very realistic, but I like my rivers and ponds blue. Next, I tried to add some shine to the water surface with help of blank acrylic varnish, but I can’t say this step had a lot of effect. Finally, I’ve stuck some flock on top of river banks with thinned PVA glue. And that was that. 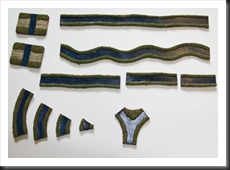 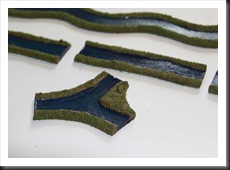 Couple of comments about painting process. First and foremost – the paint seems to stick to the rubber material used for these terrain pieces… and stays there! This is more than I can say about my silicon roads from Total Battle Miniatures. Yes, you can peel it of if you scratch it forcefully with fingernail or something sharp, but the paint doesn’t peel of on its own if you bend the ‘bands’. That’s a good thing. Second, the flock I’ve glued on with the PVA will probably rub off with time. But that’s no biggie, I’ll just reflock if I feel it’s necessary. Finally, I feel it’s a good ocassion to repeat the advice I keep hammering on this blog – if you value your money, do not use modelling paints for your terrain pieces. Vallejo, Army Painter, Games Workshop, it doesn’t matter which brand you use, their pricing is insane and wasting their product on terrain pieces will cost you a pretty penny. For large terrain pieces, use artist’s paints that come in huge tubes, or better yet, take a trip to your DIY market and find their paint section. They usually sell half litre sample jars that will last you forever, for price of two GW paint pots and carry color ranges that will make all modelling paint ‘systems’ look puny.

Oh yes, one last thing. I’ve included couple of resin bridges that were suitable for those rivers. I still haven’t painted them, but I think it’s only fair to included couple of snapshots of how they fit together with the rest of  the ‘system’. 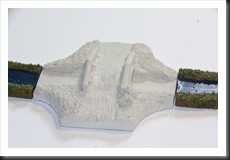 Overall, my initial impression of Timecast’s river system is very positive. They’re made of what seems to be durable, flexible material. Acrylic paint and varnish sticks well on them and they look the part once painted. Addition of dedicated bridges and possibility to integrate different river widths into single ‘system’ is in my opinion a stroke of genius and was the factor that convinced me to go with this product. So, for the moment at least, I can’t but enthusiastically recommend it to anyone in need of simple but effective representation of rivers on wargaming table.

Took me just two months, but they’re now done. Final impression after putting some paints on them? Neeeaaah… my initial impression hadn’t changed that much – they are cheap and they are adequately detailed for a wargaming table. It should be enough and yet, somehow, it isn’t.

Oh well! Judge for yourself, what do you think? 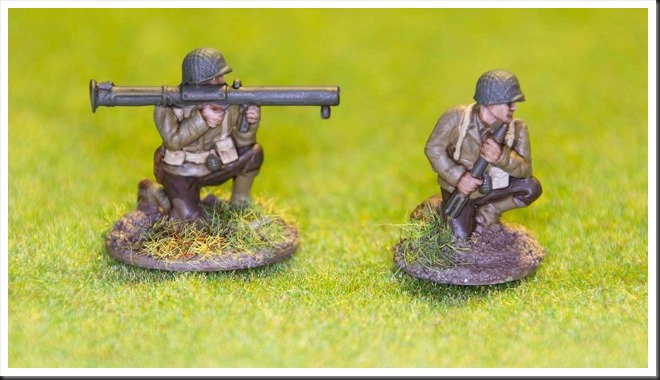 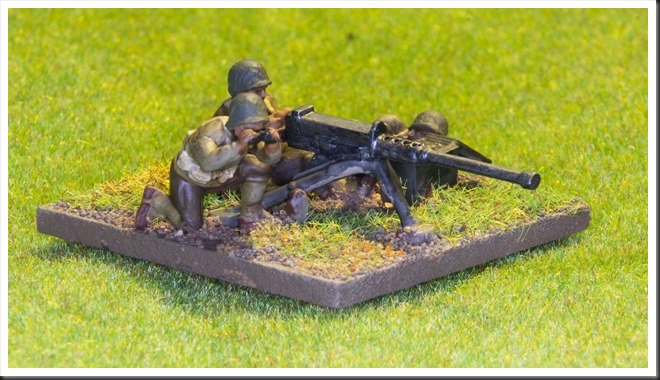 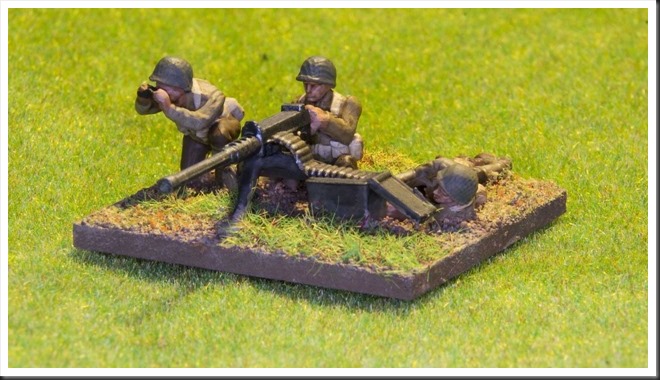 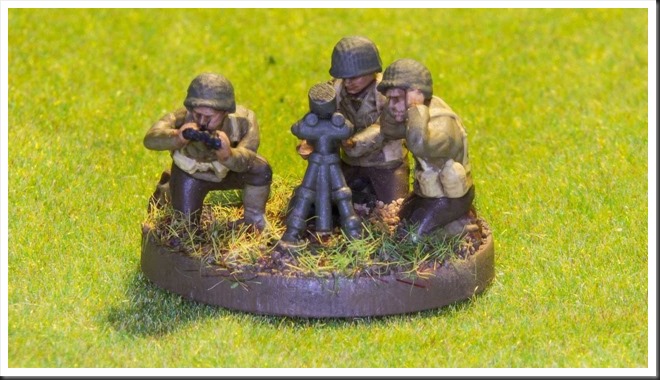 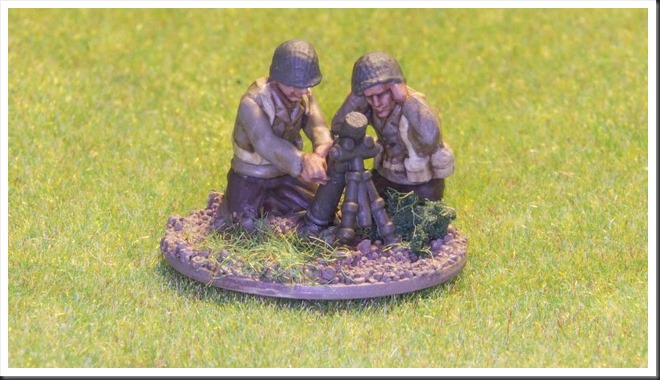 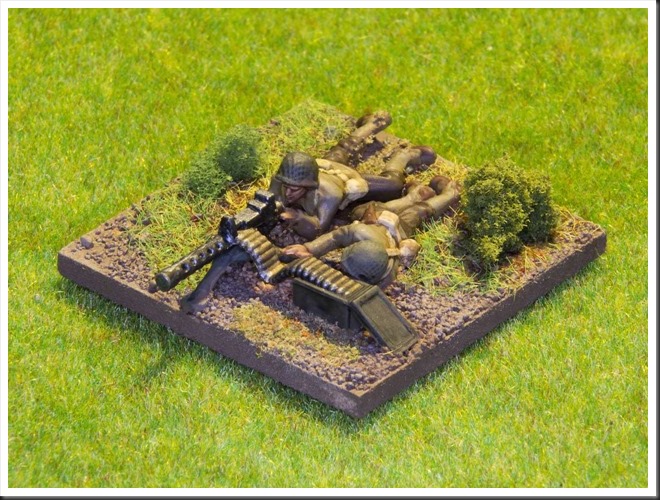 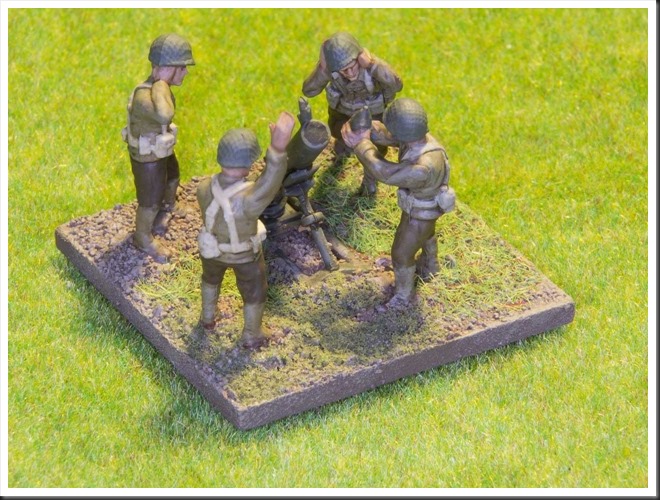 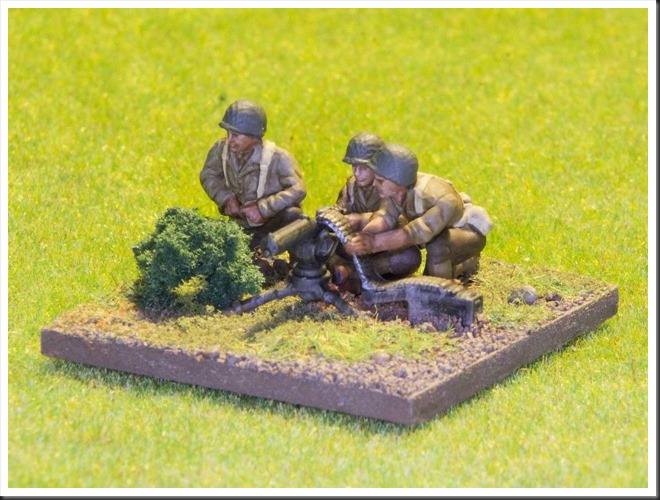