What do they say... oh, yes, road to hell is paved with good intentions. I was hoping that after first week of my vacation I would be done both with my first Spartan unit for Fields of Glory and perhaps even with that beautiful Wolftail Band for my WAB Arthurians. As it is, I still have quite a lot of work left on my Spartans and Wolftails... well, let's not talk about them at this moment.

So, I am forced to re-run some old material - here's next part of my review of Adler ACW range. While I'm fully aware that it's a silly criterion, for review purpose I'm dividing Adler's miniatures into Union and Confederate miniatures based on the headwear type on their heads. Thus minis with kepis can be found in part one and minis with hats are reviewed below.

Of course I'm not using this principle when painting Confederate units. Right or wrong, I like my Confederates to have more irregular look than their Union counterparts. For that reason in I mix freely all minis available from Adler.

Adler Miniatures ACW range - strips ACW3A/XACW4
Strips with number 3 are basically same as 1 and 2, except for the fact that miniatures wear hats instead of kepis. Strip 3A has four miniatures with firing stance. Strips XACW3 and XACW4 can be used to achieve more animated units.

With red arrows piercing the blue lines at several locations, the picture shown on the operational map looked rather depressing. If anybody was still doubting it, one look at that map was enough to tell him that the “Phoney War” was over and Jerry was on the move.

Quiet murmur of plane crews discussing the events of the last couple of days quickly died out as Captain Richards, wing operations officer walked into the tent. He walked to the map, turned around and hesitated for a moment as he observed the men in front of him. “They look so tired.” – he thought and immediately felt his own exhaustion. He then cleared his throat and started today’s briefing.

“Gentlemen, as you are well aware, the situation at the front is not developing to our satisfaction. Despite best effort of our ground forces, Jerry managed to cross the Meuse and is pushing into Belgium as we speak. HQ would like to do something about it and has ordered RAF to take out the bridges at Albert Canal.

Your squadron will participate with six airplanes. You will be escorted by two sections of Hurricanes. Expect heavy opposition – there is substantial Luftwaffe presence over the Canal and intelligence reports indicate heavy ack-ack defenses in the target area.

We will be lifting of at…”


Flying Officer Henry Stevens anxiously scanned the skies, searching for the dark specks signaling presence of enemy fighters. So far they managed to avoid the attention of the yellow-nosed bastards, but he knew that it was unlikely that their luck would hold all the way through the mission.

He looked to the sides for yet another check of the formation. He could clearly see the pilots of two Battles in his section, their heads turning from side to side as they looked for the enemy. He couldn’t find the Hurricanes, but he knew that they were there – two Victor formations, behind and above his flight. “At least Jerry won’t be having free lunch today.” – he thought. 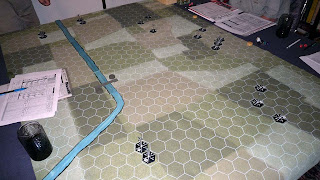 He looked forward again and there it was – a silvery blue band of water cutting through the mostly green landscape. He followed the dark grey line of the road and found the spot where it intersected with the Canal. Their target was barely visible from this distance, but the hazy contour of the bridge was enough for him to feel the pang of excitement mixed with fear.

He pushed the radio button and said: “Target in sight. Form on formation leader. Change altitude to 400 feet.”

He put his plane into a shallow dive, felt the Battle accelerate and watched his wingmen disappear behind him. The plan was to approach the target in single file formation at very low altitude. Hopefully, the speed gained by the dive and low level of the flight would counter the anti-air artillery defending the bridge.

“This is Red One. Enemy fighters at two o’clock high! Engaging!” 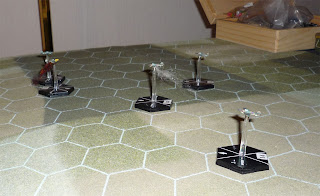 Head-on pass of Red One.

Stevens had hardly time to find the two… no, four dots rapidly moving in his direction before the radio crackled again - “This is Blue One. Bandits at ten o’clock high. Breaking formation to engage!”. Stevens snapped his head to the left, but had at first difficulty finding the enemy fighters spotted by the Hurricane pilot. When he finally saw the German planes, they were no longer small specks in the sky, he now could see their wings.

He quickly checked his instruments and then looked for the target - he could now see the trees at the banks of the channel – before looking to the right again, just in time to see the tracers sprouting from two fighter formations approaching each other on collision course. Was it fire coming from one of the planes?

Rapid staccato of strained voices now came out of the radio.
-“Blue One. I’m hit! Returning to base!”
-”Blue Two. Blue One, you got him, bastard is smoking! Engaging the rest of bandits!”
-“Red One. Bombers, enemy planes on your left. Repeat, enemy closing on your left!” 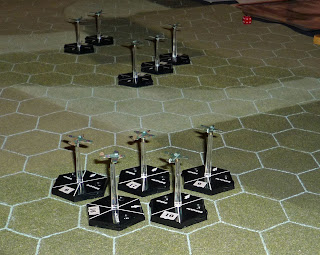 That last sentence made Stevens snap his head to the left. It wasn’t difficult to find the enemy, those two Me109:s seemed to be right on top of him. Just a split second later he saw glowing fireballs spitting out of their wings, flying straight at him.

-“Green Two, I’m damaged. Can’t control he….” – the voice cut off before finishing the sentence. Green Two, that was his number two wingman, Henley. Stevens involuntarily tightened his grip on the stick as he heard the strangely high-pitched voice of his rear gunner shouting “Oh, my God!” on the intercom. 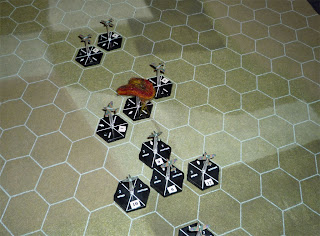 It was with grim satisfaction that Stevens watched the effect of the fire comming from the Hurricanes that pursued the German fighters. Tracers seemed to embrace the leading Messerschmitt and large chunks separated from its airframe as it closed the distance with the Battles. For a second, Stevens was mesmerized by the sight of the stricken enemy fighter visibly stagger in its path, then pitching over into a shallow dive and heading for the ground. Next, rattle of his rear gunner’s machine gun pierced through the monotonous sound of the engine, snapping him out of his fixation on the seemingly mortally wounded Me109.

The bridge was now just a couple of kilometers away and he made last routine check of the instruments. Suddenly multiple fingers of tracers reached out toward him – yes, for once the intel was correct, a lot of ack-ack down there and they all seemed to focus on his plane. He pushed the grim thoughts out of his head and concentrated on the quickly approaching bridge. He heard his gunner shouting intelligibly with excitement on the radio. Then a Me-109 passed his Battle just couple of hundred yards away, its engine engulfed in flames. It disappeared below him, as suddenly as it appeared. Later he found out that Jenkins actually managed to damage the enemy airplane with his puny Vickers machine-gun and Hurricanes swiftly finished it off.

Bridge was straight ahead now. Just a couple seconds more…. 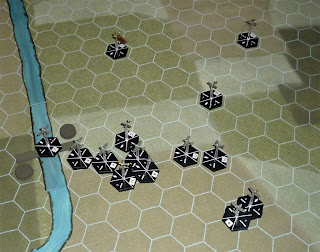 Green One bombing the bridge.

“Releasing bombs!” – Nick Doyle, his bombardier confirmed what Stevens already knew, as he felt the Battle jerk up once it was released of its bomb cargo. Then he heard Doyle shouting “Direct hit!”. Sense of satisfaction replaced for the moment the dread that Stevens felt ever since the Messerschmitts were spotted.

That feeling lasted just for a second– Stevens kept his low altitude and banked the Battle to the right. As he banked the plane, he could see the horrifying spectacle above the bridge. Somehow he managed to get several hundreds of yards in front of his squadron – remaining Battles reached the bridge only now. Just before they reached the target, a pair of yellow-nosed 109 reached them and raked the bombers. Stevens’ face twisted in helpless fury as he saw the bullets tearing into two of the Battles, literally ripping one of them into pieces. The other one started to smoke, but stayed on course. Two surviving Battles released the bombs just a moment later, both missing the target with couple of yards.

What followed next stunned both Stevens and apparently everybody else. Two Hurricanes appeared behind the Me-109:s that annihilated the Battle just a second before and for a moment Stevens could hardly distinguish friend from foe. Then both German planes took advantage of their speed and rose up in the air, performing textbook Immelmans. Stevens observed them arching up in the sky, coming closer and closer together… and finally colliding with each other! The Messerschmitts seemed to bounce of each other, creating a cloud of debris at the point of impact, but amazingly both planes stayed in the air. 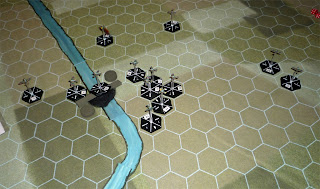 This rather unexpected event seemed to take the spirit out of the Germans. Anti-air fire slackened for a moment, crews of the guns probably being afraid to hit their own fighters. Surviving British airplanes took this opportunity to extricate themselves from the area. Stevens continued to wearily observe the German planes for a long while. As it turned out, he didn’t have to. Remaining 109:s seemed more interested in nursing their damaged comrades back to the base, rather than following the bombers that already did all the damage they could manage.


Stevens felt empty inside. “We did what you asked us, now make it count.” – he thought as he threw last glance at the black columns of smoke marking the graves of his comrades - “Make it count!”.
Upplagd av Minondas No comments: