No, this is not a new project I’m jumping into before finishing the Vietnam thing! Rather, this is the slowburner project I’ve mentioned in passing in one of previous posts. And yes, as the name of the post indicates, I’m still dabbling with terrain. Ghasp!!!

Let’s start from the start though. Those few who’ve took the time to read some of my previous posts may have noticed that I’m mainly playing on two different types of terrain. The first are the GHQ 4 inch wide hexagons which I use for games with 6mm minis. The other is a 6x4 feet terrain mat that I’ve bought long time ago from terrainmat.com along with some roads, hills and other bits of terrain. Those two ‘solutions’ pretty much cover my needs, but both also have some characteristics that annoy me more and more. GHQ hexagons seem perfect in theory, but in reality they’re really a major hassle. They’re very labour intensive to begin with, take forever to lay out on the table and despite the fact that I have made about 300 of them, I still seem to be missing many bits and pieces every time I’m to use them. The gaming mat has its own set of problems, the major one consisting of the fact that my gaming table has the odd dimensions of 150x150 cm and the mat is roughly 180x120 cm. Round peg, square hole, so to say… Also, adding new terrain bits that ‘fit’ with it means getting them from manufacturer from England, which in turn means rather high delivery charges on top of the cost of already expensive products.

And so, here I was - with two terrain systems, none of which fully satisfied me. After investigating available alternatives, I decided to give doing it myself a shot. But before I rushed over to the DIY shop, I paused for a minute (well, couple of months really) and thought about what I really needed. The basic ‘requirements’ I came up with were these three:

Once this was ‘in place’, it was time for the first major decision – a gaming mat or boards. I’ve seen several videos on Youtube where people made their gaming mats from caulk and giving it a try was tempting. But in the end I decided to go with boards – they’re easier to store, don’t demand as much initial effort, are in some respects more flexible and finally, I like the look of them.

So what about the dimensions? That one was actually easy – basic board would be 30cm square. Not only will a setup with such boards cover perfectly my 150x150 cm gaming area, but I also discovered that my dining table is 120 x 90 cm, another perfect fit!

Next, the materials. This one was a bit tricky. Vast majority of gaming boards I’ve seen both on the net and in real life are made of this ‘mythical’ stuff called by wargamers pink stuff, green stuff, blue stuff. Its correct name is extruded polystyrene and it’s used for insulation in building construction. It’s very durable, withstands pressure very well and is extremely expensive when compared with it’s ‘little brother’, expanded polystyrene. You know, that white stuff used for packing of everything between heaven and earth and which consists of those little white pellets that get into every corner of the flat if you accidentally shred it. The thing is though that expanded polystyrene is also used in construction, thus it can also be found in DIY stores, in fact much more easily than the extruded variant and comes in a variety of thicknesses between one and ten centimetres. It is also lighter than its extruded sibling. Finally and most importantly, its price is about a sixth of the fancy ‘pink stuff’!

Can you guess which colour I chose?

Oh, in case you wonder, the thickness of polystyrene for my basic boards is 2 cm.

When used for terrain projects, polystyrene sheets are usually mounted on some sort of wood sheet material – plywood, MDB, fibreboard… Here, my initial choice was a bit peculiar – for a first batch of boards I’ve got a bunch of those painting canvases glued on 3mm MDF. The nice thing about them was that they’re pre-cut in correct dimensions and I could get them from the arts supplies store nearby. The stupid thing with them is that they cost about 25SEK a piece, which in the long term perspective would considerably run up the bill. And, as you remember, I wanted it to be cheap. And so, with heavy heart, I took a trip to a DIY store (why ‘heavy heart’ you ask; well, for some odd reason I really don’t like DIY stores, all the stuff there reminds me how hopeless I am at this building stuff like hammering in spikes, drilling holes and changing pipes) and made some employee to cut me a shedload of 30x30cm squares of 3mm MDF sheet. Total cost – just over 200SEK for about 30 squares; significant difference when compared with stuff from arts store!

As for the rest of materials, I just fell back on my experience with GHQ hexagons – acrylic household paint in half-litre sample jars, sand and flock. However, a slight adjustment was made in respect of that last component – Woodland Scenics turf, which I use for my GHQ hexes is pricey, so in this project I decided to switch to sawdust scatter material from Noch.

All right, so after this probably far too long introduction, here’s how I make the boards. As always, an advisory/cautionary final comment – in no way, shape or form do I claim that this is how this stuff is to be done. It’s just the way I do it. If you think my approach is useable and want to try it yourself, I’m glad to be of service. If you on the other hand think I’m out there and those boards would be ten times better if done some other way…. great, write me a comment and I’ll be happy to listen to your advise and probably ask for more once I’m done.

Finally… let’s get on with it. 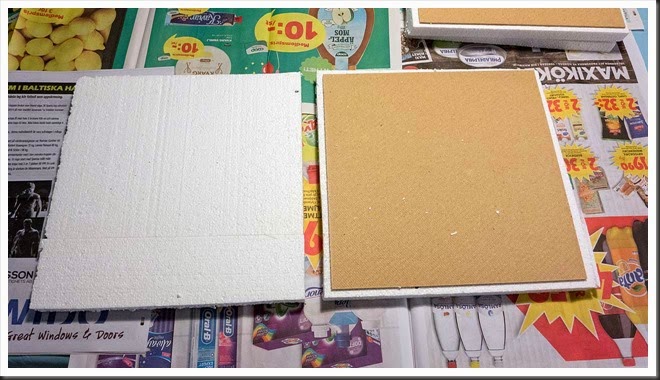 1. First, the boring part – cut out polystyrene squares. The sheets I bought are 120x60 cm, so I can cut out three whole squares and then four halves out of what remains of the sheet. Next glue them to MDF backing with standard PVA glue, stack them on top of each other, put something really heavy on top of the stack (like a large bucket filled with water) and leave over the night. Just remember to flip the topmost board so that the MDF backing faces outward. If you put that heavy thingy directly onto polystyrene, it may leave an unwanted imprint. Don’t ask how I found that out! 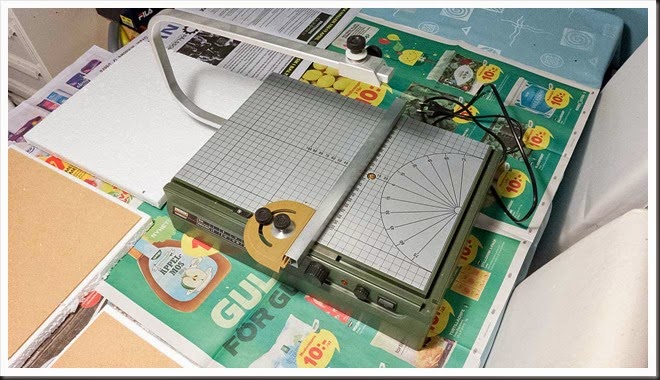 2. Next, trim off the edges of the polystyrene. It can be done either with a very sharp knife or with hot wire tool. Regardless of how one does it, it is quite important to get smooth edges. Also, it is a good idea to cut not at 90 degrees angle, but slightly outward – that way, when boards are pressed together on the table, polystyrene will be squeezed together, making a homogenous gaming surface even if there are minor imperfections at the edges.

In this step, I blatantly cheat and sidestep the ‘cheap’ requirement, Table hot wire cutting tool from Poxxon costs a pretty penny, but also makes any work involving cutting polystyrene so much easier. 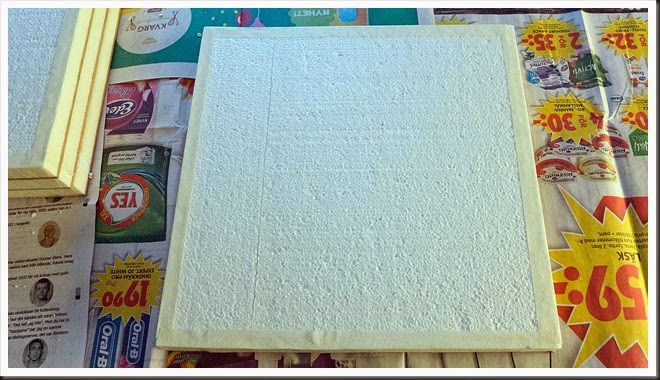 3. With cheap stuff some compromises must be accepted and let’s face it, standard expanded polystyrene is soft and prone to crumbling, especially at the edges and corners. Solution is simple – protect the edges with masking tape. 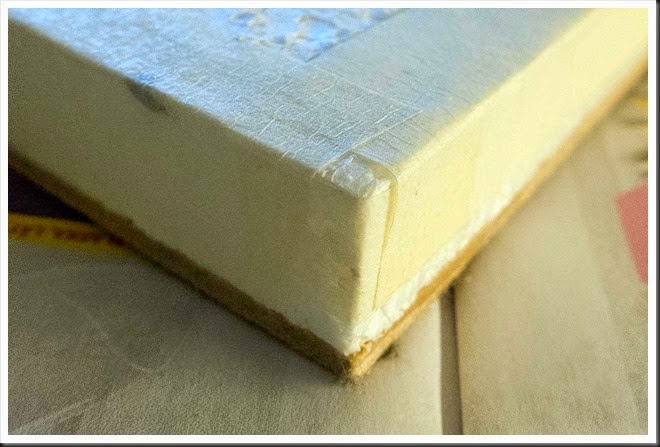 4. Pay special attention to the corners, as they will bump into stuff. 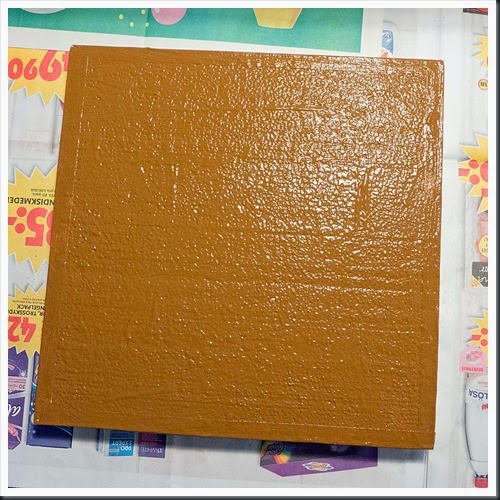 5. Now the messy and indeed optional part. Do this if you want to ‘cover’ the grainy surface of expanded polystyrene. If you don’t care, then skip over this step. Paint the board with acrylic household paint of your choice. As I mentioned before, sample cans can be gotten in paint shops or DIY shops for peanuts and choice of colours is mind-numbing. 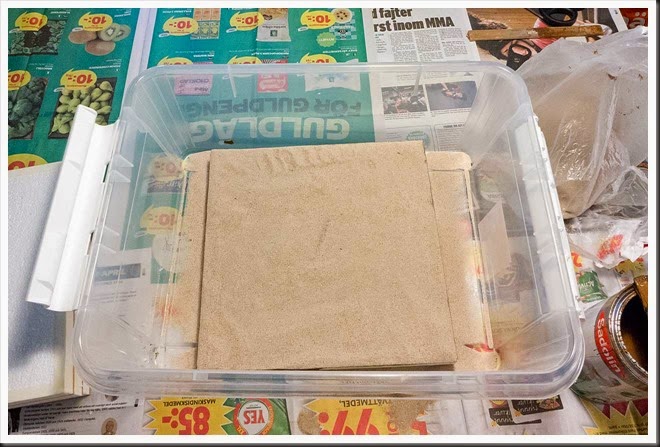 6. Cover the surface of the board with sand. Here, I use very fine sand, but you could use something rougher or even a mix of sand and pebbles in different sizes and use that as your texture. Putting the board into a container of some sort is a good idea if you don’t want to have a major house cleaning session afterward! 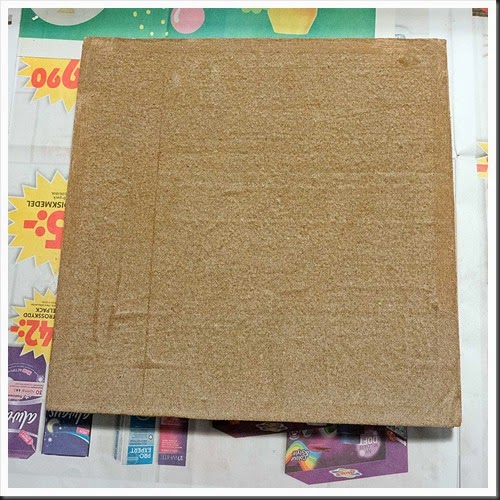 7. Give it a minute for sand to stick to the surface, then shake off the excess into the container. My board looks like this at this stage. Leave the boards to dry for at least couple of hours, then paint another coat of paint on top to seal in the sand or whatever you used as texture to the board. Then leave the boards over night to dry. 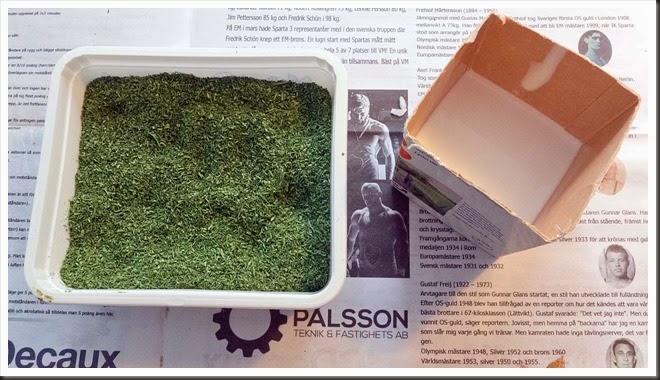 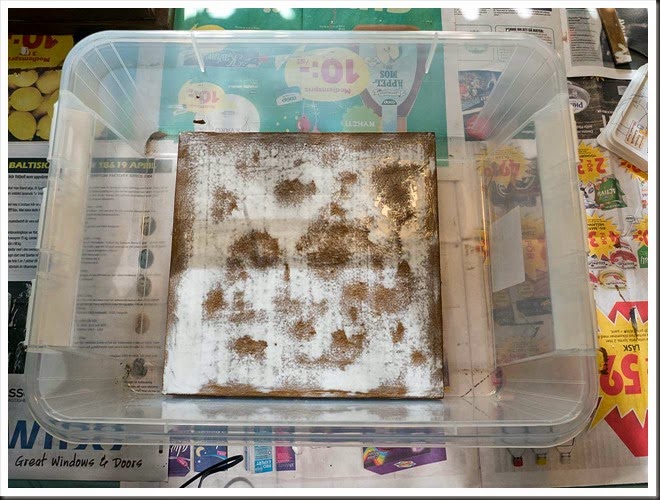 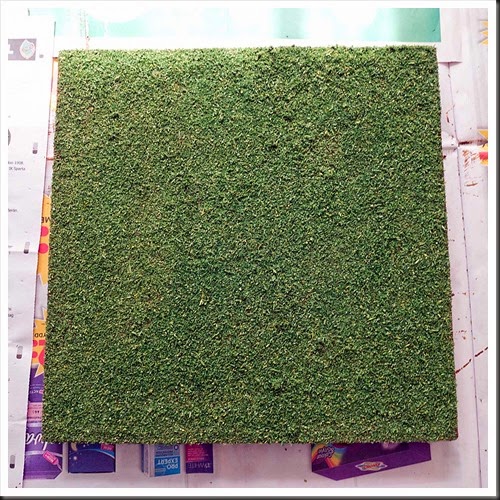 8. Final step is in my case pretty much a repetition of 5-7, except that instead of paint I use PVA glue diluted 1/1 with water and Noch sawdust scatter material for texture. One thing I’ve noticed here is that the glue either runs ‘toward the centre’ or dries quickly at the edges of the board. This results in scatter not adhering and board edges remaining ‘bare’. So make sure that there is wet glue at the edges when you cover the board with the scatter material.

Leave over night to dry and that’s it!

When I started this little project at the beginning of last year, my goal was modest – I wanted to make four boards per month. At that pace I would have 25 basic boards necessary to cover my table after six months, after which I planned to work on basic elevations. Now it’s 16 months later and I managed to finish mere 15 basic boards. As I use to say, Procrastinator could be my middle name.

Still, the boards I managed to finish look the part and I hope to accelerate ‘production rate’ over the rest of this year. Hopefully you’ll see them in action pretty soon.