Disaster in the dark

Two weeks ago it was time for another ‘Check Your Six’ scenario from ‘Over The Channel’ scenario book. This time it the turn came to ‘Into the darkness’. Name of the scenario refers to the fact that it is a little different from the rest, as it tries to represent the challenge of night bombing raids in those early years of the war.

To simulate the difference in night and day missions, a couple of special rules are implemented in this scenario. Visibility is very limited, while German bombers are allowed to fly individually. Additionally any airplane that is can be shot at, needs to perform a check for illumination – if it makes it, it is invisible for the rest of the turn.

Goals of this scenario are very simple for both sides. The objective of six Heinkels was simple – try to stay alive while traversing the board. For three sections of British assailants – one section each of Spitfires, Hurricanes and Blenheims – the task was to find the bombers and bring down as many as possible. Their task was made difficult not only by very limited visibility conditions and special rules, but also by random entry points in regard of both location and altitude.

As things turned out, start of the game ment some good news and some bad news for the German players. Blenheims came in low and out of position – this was very fortunate for the opposition, since those obsolete light bombers hastily converted into night fighters are real hogs in regard of speed and climb rate. But any optimism on the German side was quickly dispersed by the fact that both Hurricanes and Spitfires entered the table with height advantage and behind the Heinkels. We didn’t know it by then, but this simple fact more or less decided the outcome of game. 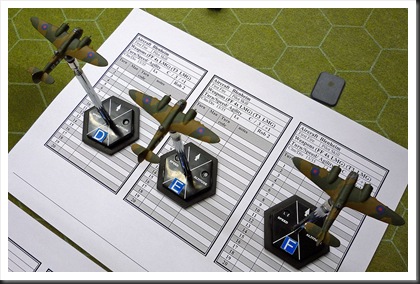 Blenheims making a debut in this game

The game itself was straight forward and the events need only few sentences to be described. William and I were in control of the bombers and we decided upon different strategies. My previous experience told me that defensive armament of German bombers can be very effective made me decide to keep my planes in formation. William went for speed and additional maneuverability of bombers flying individually. One of us made the right call, the other was disastrously wrong and payed the price. 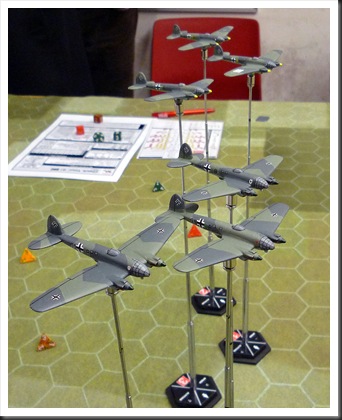 I have to add though that I don't think any decisions would change the course of the game – both Hurricanes and Spitfires took full advantage of altitude and speed and came into range within a couple of rounds. Since my three Heinkels were from British point of view was flying slightly behind William’s bombers, they were the natural first target and they took the brunt of British onslaught. As soon as the fighters reached optimal firing position, it was all over but the crying for my doomed Heinkels. A single burst of .303 machine guns was all it took to bring down first victim; other two put up a better fight, but nevertheless went down after being repeatedly by British fighters. 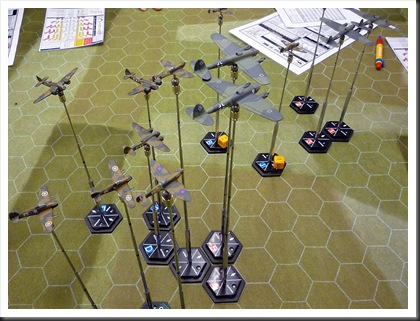 Distraction of three juicy targets or ‘the heroic sacrifice’, as I prefer to call my dismal performance in this game, did have one positive side-effect – it bought William enough time to dive, dive, dive and put some distance between majority of British fighters and his Heinkels. 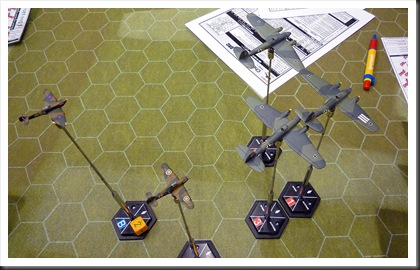 Heinkels making it to the other edge of the table

Nevertheless, one Spitfire and one Hurricane did manage to score some hits into his bombers, with limited success of knocking out both dorsal gun positions on one of the bombers (two lucky hits, both resulting in same effect). This didn’t stop William from exiting the game area with three more or less intact Heinkels.

Over Albert Canal once again – this time bigger and improved

Year of 2009 seems to be starting for me under the sign of reruns. First a double take on Belmont and last week I had opportunity to yet again play the Albert Canal scenario with Check Your Six ruleset.

Same Game, Different Approach
A little background info about the second bombing run on the Albert Canal bridge. Great rulesets attract the attention of many wargamers and Check Your Six is no different – William from Dansk Figurspilsforening in Copenhagen became as delighted in CY6 as I did and decided to run the Battle of Britain campaign for the club. But while our objective was the same, our approaches could not be more different. In simple terms, I choose the ‘cheap and simple’ approach – 1/600 airplanes, simple stands, as small gaming area as possible. William went ‘full monty’ – 1/300 airplanes of best possible quality, telescopic stands with custom magnetic mounts, historically correct decals… Quick comparison of the pictures from our games will show the difference in visual impact. 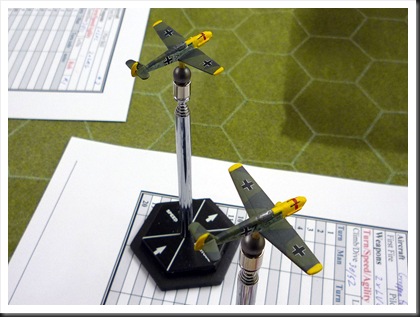 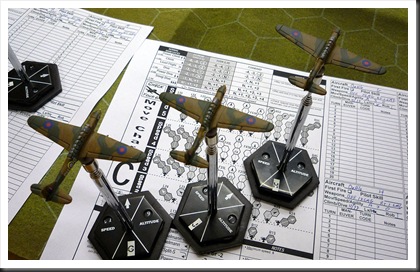 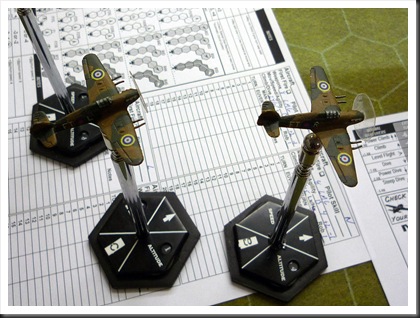 Once again, over the bridge
On to the game… In some respects, the scenario played out in surprisingly similar manner as my first attempt. Three rotas of Me109 were spread out all over the edge opposite to entry point of the British, but having the altitude advantage, quickly closed the gap. First blood was drawn by the German veteran pilot, who despite having to take a difficult deflection shot, managed to down one of Hurricane formation leaders with a single burst from his 20mm cannons. This caused some consternation on British side. Loss of one of their valuable Skilled fighter pilots this early in the game would have been bad enough. However, this sudden victory allowed victorious German and his wingman to fly over British bombers and then sweep behind the completely defenseless rear formation of Fairey Battles. The best comparison for what followed would be ‘fox in a hen house’. Two of the Battles went down in quick succession, while the remaining survivor was forced to turn home, trailing thick plume of smoke. The fact that wingmen of the downed Hurricane caught up with the Germans and managed to damage airplane of the wingman was small consolation for the British. 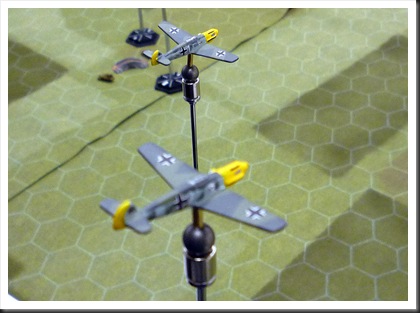 No bombers for me this time around.

Meanwhile, a vicious dogfight developed in area around the remaining Battles. One pair of Me109 dove onto the bombers with the intention of obliterating them in a single head on pass. This maneuver was matched by the three Spitfires, shooting wildly in an attempt to discourage the Germans. This tactic was successful – no hits were scored by the Germans, but one of Messerschmitts suffered airframe damage. 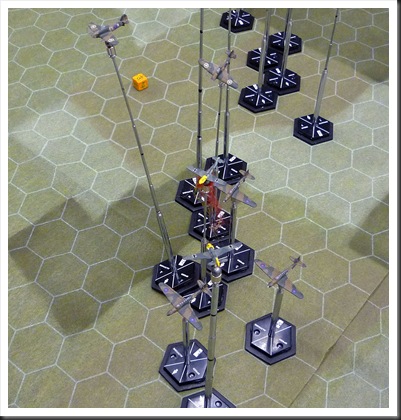 Dogfight around the front formation of Battles

Remaining German formation initially stayed out of the fight, maintaining the height advantage until the last moment. Just as the foremost Battle was about to reach the bridge, leader of German formation performed a very deep Split-S, placing himself in perfect position behind the bomber. Cannon shells ripped the Battle apart just seconds before it could drop its bomb. (Yes, it was one of my planes – and since it’s my blogg, I can brag all I want here :-) 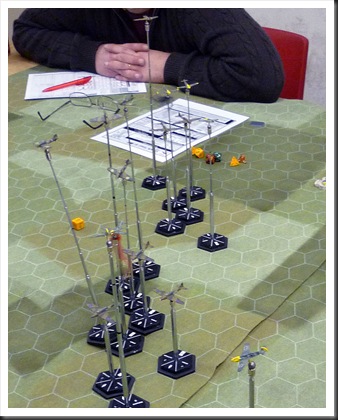 Panoramic view of the action

This violent maneuver had however some unfortunate consequences – in a desperate attempt to follow his leader, wingman of victorious German pilot managed by accident to place himself in front of two Spitfires (same guys that already scored hits on one of Me109:s in the other formation). .303 bullets found their target and yet another German Messerschmitt suffered serious damage.

Next couple of rounds put a smile on the faces of British players – all German fighters were by now out of position and unable to do anything to stop last two surviving Battles from flying over the bridge and putting one of the bombs squarely into the target. One of them was hit immediately afterward by a stray bullet from German fighter and started to burn, but the fire quickly subdued (I must say that I love the shooting mechanics of CY6) and both Battles were able to turn, heading for home.

Final episode of our game occurred when one of the Hurricanes tried to pursue my damaged wingman – undeniably reckless decision, as it made it possible for three German fighters to get on its tail. Brave but foolish British pilot became an easy pray for the Veteran Messerschmitt pilot and my rote leader The game ended on that somber note. British side suffered horrible losses – three bombers and two fighters were downed, while two more Battles were badly shot up. Germans didn’t come out unscathed out of the contest with three of the Me109:s suffering serious damage. Nevertheless, thanks to a single well-aimed bomb, it was yet again a close British victory with final the final score being 22 to 20.