When I look at the date of my latest entry in the blog, I can't help but wonder about how fast time passes these days. Also, I wonder about how often the phrase 'Not dead yet!' has been used on half-abandoned blogs, followed by explanations and excuses. In this case, my long silence was caused by several different factors,but first and foremost - I moved to a new place. The bad thing here is that fixing the new place is taking ten times longer than I expected. The good thing is that I finally have both a nice painting area and plenty of space for a decent gaming table.

Returning to the age of Arthur
This blog is supposed to be about miniature wargaming, so enough about my new flat and let's move over to last Sunday’s event. On that day H. came over with his Saxons and we gave Warhammer Ancient Battles another go. It was our third game, so we were finally starting to get a grip of the ruleset. Nevertheless, I was a bit anxious, because our previous games ended in a rather inglorious whooping of yours truly. Now, I don't mind having my behind being handed over to me every once in a while. In case of H.'s Saxons however, the single reason for my defeats was the monstrous special character of his king, who so far managed to vaporize anybody who dared to stand in his way. Romano-British army list doesn't really offer any direct antidote to that monster, something that I admittedly started to find tad unfair and frustrating.

Same, same, but different
Since we are both still fumbling our way through WAB ruleset, we decided to run yet another set piecebattle with few pieces of terrain for sake of variety.

Our deployments were rather unimaginative. I placed a huge swarm of skirmishers in the rough ground to my right, while the rest of my infantry - two units of milites and one of peasant rabble were placed in the centre. My mounted mounted milites in skirmish order were placed on my right flank, while mounted commanipulares were held in reserve.
H.'s dispositions were pretty much a mirror of mine - his skirmishers, although heavily outnumbered by mine, intended apparently to meet mine in a straightout shootout contest. Three units of Saxon warriors were placed to the left of the skirmisher, while his cavalry concentrated on the Saxon left flank.

H's intention was apparently to repeat the events from our second game - smash with his cavalry through my rightmost milites unit and then take care of my cavalry. With that suspicion in my mind, I choose a purely defensive strategy - infantry would take the charge and hopefully hold. In the meantime, my light troops would try to annoy the crap out of the Saxons with missile fire. 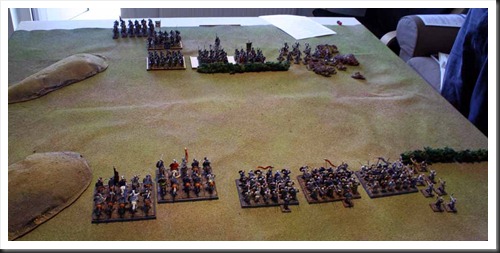 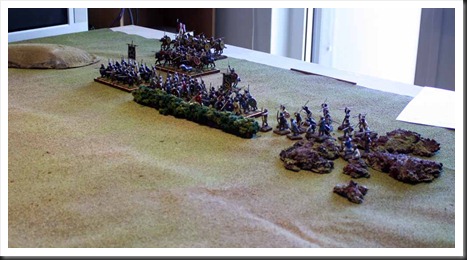 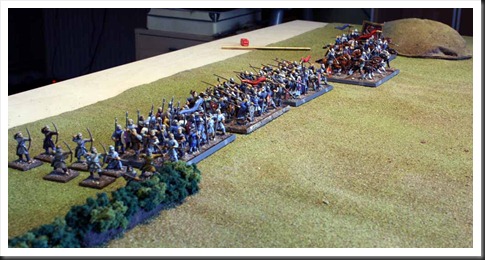 When events actually follow the plan
The battle that followed can be described in very few words. H moved his entire army forward, while I awaited the onslaught. My foot skirmishers on right flank exchange missile fire with H's archers and mass of Saxon infantry. The results were inconclusive, the only source of real excitement being caused by an uncontrolled charge of some of his infantry, which my skirmishers avoided by a hair's breath.

Main action was once again initiated by H:s cavalry. His light cavalry unit charged bravely into my rightmost milites as soon as it was in range... and was promptly sent back with a bloody nose. I must admit it caused me no small pleasure, because similar charges in our two previous games started disastrous chains of events that led to catastrophic defeats of poor Romans. Not this time though; it's nice to know that WAB is capable to handle cavalry charges into formed infantry in proper manner. It’s even nicer to know that my army doesn’t always trip over its own legs at slightest push. 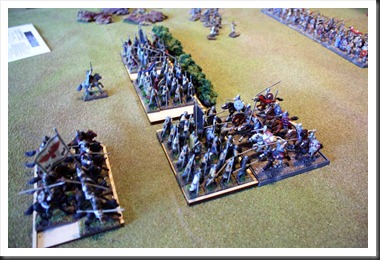 His initial setback failed however to disturb Saxon king's retinue, who in following round managed to completely mangle mounted milites on my left flank. Poor buggers came a tad too close to Saxons in open formation and were caught while trying to evade the predictable chagre that followed. This success placed Saxons in perfect position for a clash of arms with my mounted commanipulares, a contest which on both previous occasions proved to be catastrophic for my general’s retinue.

Sure enough, the Saxon king charged and to everybody’s suprise failed to make any impression whatsoever on my cavalry. The fact that I cunningly equiped them with heavy armour for this battle did help. To be fair though, H:s hopeless luck with dices helped even more. My retinue also managed to cause enough Saxon casualties to make them flee. This rout would have once again been been a decisive one, but for the fact that in this battle Saxons were as skilled at running away as they were in close combat on previous occasions. 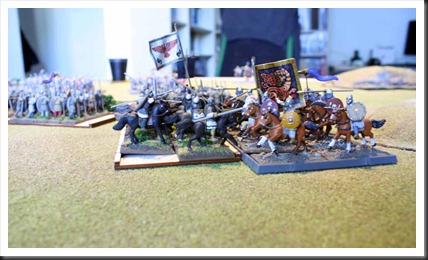 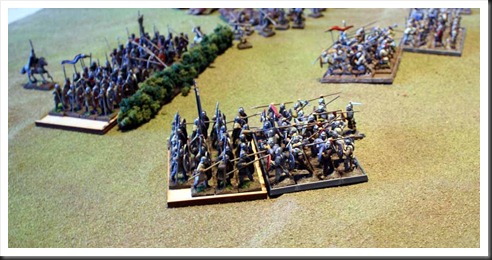 Inconclusive infantry engagement in the center 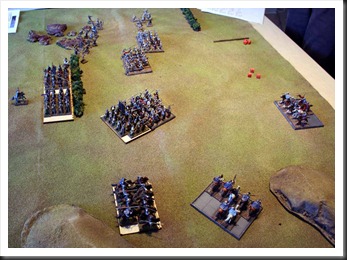 Situation at the end of the game

By that time we were both satisfied with the outcome and decided to call it a day. It turned out to be yet another Saxon victory, although this time it was a mariginal one. Personally, I was mostly relieved that my Romano-British army didn't (once again) crumble like a paper mug. H. was probably a tad relieved over and certainly very entertained by happy escape of his king's retinue. Overall, a pretty decent Sunday afternoon.