The legacy of Alexander by A.B. Bosworth 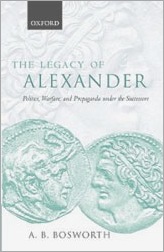 Considering the vast popularity of both the Greek city states and Macedonian expansion in our hobby, it was a small surprise to me how little is written about the period after death of Alexander the Great. I know of a few publications by Montvert that are almost mystical because of their rarity and even the ubiquitous Osprey Publications hardly covers the period.

It was for that reason that I ordered ‘The Legacy of Alexander – Politics, Warfare and Propaganda under the Successors’ by A.B. Bosworth as soon as I discovered its existence. I bought it in hope that it would give me an overall coverage and detailed information about the military history of the period.

Sadly I must say that those hopes were grievously disappointed. ‘The Legacy of Alexander’ is a strictly academic book and its primary intended audience is clearly the historical academic community which already possesses previous knowledge of not only the primary sources, but also previously published articles and books that analyzed materials that survived to our times. I don’t shrink from plowing through detailed dissections of individual sentences in ancient scripts, but I consider myself an enthusiastic amateur in my studies of history. That is perhaps why I frequently found myself both overwhelmed and loosing interest in Mr. Bosworth’s musings regarding possible translations of ancient Greek or personal motives of ancient authors.

Topics covered by ‘Legacy of Alexander’ were also something of a letdown. Far from being encompassing history of the Successors, it is split in separate chapters that focus on few very significant events of that period. Two chapters are of direct interest to wargamers – first of them deals with Antigonus The One-Eyed Iranian campaign against Eumenes and the other tells the story of Seleucus and his struggle against hegemony of Antigonus. Both of those chapters contain very valuable information for campaign designers and for setups of battles of Paraetacene and Gabiene.

Another chapter deals with the Babylonian Settlement, which took place immediately after Alexander’s death and decided who would be primary actors of initial phases of the unfolding drama. A separate chapter is dedicated to a discussion regarding available Macedonian manpower during the reign of Alexander and that of Successors. Finally, A.B Bosworth discusses legitimacy of Macedonian dynasties that crystallized out of the Successor period and provides extremely detailed analysis regarding validity of texts written by Hieronymus, one of our principal sources for the period.

Chapters regarding Babylonian Settlement and Macedonian manpower resources are fascinating and contain both data that should be of interest to every campaign designer for this period. I also suspect that some of the conclusions of the author will wreak havoc with many army lists.

‘Legacy of Alexander’ was sadly not what I wanted it to be. That being said, it’s still a very valuable book, both for those interested in the period in general and also for wargamers. While it’s not the primer I was looking for, it should be picked up for deeper study of this fascinating period once such primer can be found.