Last post related to Peter’s Hill scenario… Just a couple of days before the game, I realized that the terrain setup required a long stretch of rough stone wall. I didn’t have time to order any, so it was time to improvise. 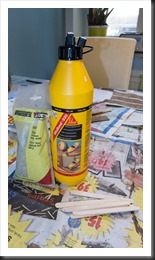 Without having any real concept of how to make the walls, I picked out the materials that made sense:
* PVA glue.
* Medium size tallus I use for basing.
* Small popsicle sticks. 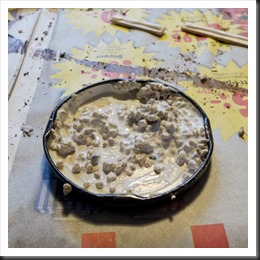 My initial idea was to mix PVA glue and tallus into a thick grout and spread it across the sticks. This turned out to be a completely impractical idea – the stone/PVA glue porridge stuck everywhere but where I wanted it to, but mostly to my fingers. 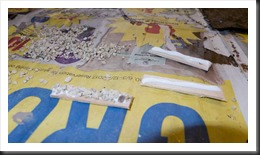 It was time to regroup. Next, I cut up the sticks into smaller bits and then put a thick wad of PVA glue across their length. Then I just strossled the tallus into the glue. 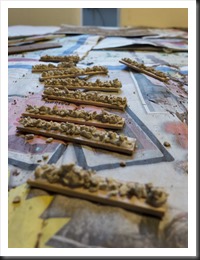 This approach seemed to work much better, but the ‘wall’ seemed a bit low with just a single layer of tallus. So I waited an hour or so and then repeated the process – I put another blob of PVA glue on top on top of initial layer and more stones were sprinkled on top.
Also, just to make the ‘wall’ a bit more compact, I squeezed the stones together a bit. With the first layer semi-dry I had actually a bit of control when shaping the wall. 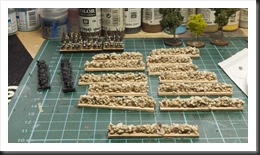 I left the walls to dry over the night. I was a bit concerned about possible warping, since there was a lot of PVA glue pulling at these sticks from the top. But, possibly due to the fact that the wood pieces were no longer than 10 cm, they stayed flat.
Painting process started with an overall black coat. 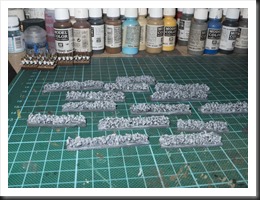 Next, I drybrushed the walls with successively lighter shades of grey. Here’s the final result (althogh I did flock the bases with some green turf).
The entire project took me less than two hours to complete. It’s nothing complicated, but I have to admit that I was surprisingly pleased with how those little walls turned out. Mostly because it was a true scratch build and I don’t do those very often.
Upplagd av Minondas 1 comment:

So let’s discuss ‘Guns of Gettysburg’ for a moment. After one game it is hardly possible to draw any definite conclusions, but my initial impression is definitely very positive. However, it’s not all smooth sailing and even this single game disclosed some ‘holes’ that I know will be bugging me in the future.

‘Guns of Gettysburg’ is a derivative of Partizan Press’ Napoleonic ruleset ‘General de Brigade’ and its origins shine right through even after a single game. If one were crass, it could be said that there really is no justification for ‘Guns of Gettysburg’ to have been released as a separate ruleset, since it’s pretty much ‘General de Brigade’ tweaked to work in ACW period.

I have once upon a time posted my thoughts about ‘General de Brigade’ and its game mechanics. These comments are still valid and may serve well readers wishing to get a better insight into that ruleset. Here, I will limit myself with short walkthrough through a game turn and then concentrate on differences between two rulesets.

The turn sequence in ‘Guns of Gettysburg’ is exactly the same as in ‘General de Brigade’:

Any dice rolls in ‘Guns at Gettysburg’ are done with two six-sided dices. The game engine is pretty dice-heavy - all morale checks, firing and melees are decided with dices and even with few units, the amount of rolls does mount up. At the same time, once one gets the grasp of the basics, the game moves along rapidly, without major hick-ups. Consistent use of 2D6:s throughout the ruleset simplifies things and the amount of dice modifiers is kept within reason.

As already mentioned above, ‘Guns at Gettysburg’ isn’t really all that different from ‘General de Brigade’. Here and there one can spot small tweaks in the ranges and casualty tables. Some modifications have been done to the dice roll modifiers (some of them are a bit surprising and maybe even questionable, more on that later on). If anything, it’s the parts that have been removed from ‘Guns at Gettysburg’ that are making the biggest difference in my opinion - a lot of fiddly rules related directly to Napoleonic period have been yanked out of its ACW derivative. Ironically, in my opinion, these removal seem to have a positive effect of providing much smoother gameplay!

There are two significant changes that need to be mentioned. The first is related to formations; squares are no longer available for infantry - a reasonable and hardly surprising decision. Two new formations have also been added. The first - open order - allows the regimental lines to extend their width. This is clearly an attempt to reflect more flexible character of linear formations during ACW and a very justified addition. Addition of second formation - brigade attack column - is a bit harder to justify. It allows regiments of a brigade to ‘stack’ one behind the other, with bonuses to morale when casualties are taken. Clearly, it’s an assault formation intended for brigades with orders to charge the enemy. To my best knowledge, such battering rams were organized on few occasions during the conflict and were hardly a standard modus operandi for ACW armies. Therefore, I’m not entirely convinced that this addition is really necessary.

The other significant change when compared with ‘General de Brigade’ is of far more importance. Section regarding skirmishers has gone through significant overhaul. In ‘General de Brigade’ there are three options to use skirmishers - throw out light companies as screens for individual battalions, create a brigade screen of combined light companies of a brigade or use light battalions as skirmishers. In ‘Guns at Gettysburg’ options for use of skirmishers have been significantly extended. Individual regiments can deploy into skirmish order either completely or with half of its strength. Brigade screens can consist of up to fifty percent of strength of regiments, with variable number of troops committed from individual units. Perhaps most importantly, skirmishers are no longer regarded as separate formations, but can be deployed and recalled by parent regiments at will. This change is yet again reflecting differences in tactics of the two periods. Added choices deepen the complexity of tactical deployment and I suspect it will take me a while to understand cons and advantages of these new options.

Other changes to the ruleset aren’t all that dramatic, but couple of things did provoke a reaction from me. On the positive side, the ‘double-six’ rule has been modified and expanded upon. In ‘General de Brigade’, any roll of two sixes in firing or melee phases could cause additional effects on units and generals. In ‘Guns at Gettysburg’, this mechanism extends to all rolls in the game and may give the players ‘bonus cards’ that can be played at subsequent stages of the game. Player may for example move a brigade of his choice at double time, add a one time bonus modifier to his fire/melee dice-roll or call for a morale check with negative modifier upon an enemy unit of his choice. All such actions are ‘one time events’, gained randomly after a roll of a double six. While this game mechanism in itself strikes me as rather gamey, it’s obvious it adds to the fun factor.

On negative side, few of the modifiers did make me raise an eyebrow in wonderment. One I’m very sceptical to deals with effect of overall losses in regimental morale checks. As default, for each ten percent losses a -1 is added to the morale check dice roll. But… Confederate regiments have here a maximum cap of -3, which definitely gives them an edge in a prolonged firefight. As a compensation, Confederate units rout do suffer a -2 modifier when attempting to rally. And since the rally from rout can only be made once with either success or dispersion of unit as possible outcomes, it is a significant penalty. The designer, apparently aware that these modifiers will be discussed, addresses them specifically in his notes and explains that it’s a simple attempt to differentiate both sides from each other. But at the same time, in his opinion at least, this difference is justified by historical performance of both sides. Well… I will be honest and admit that I am not at all convinced by that explanation. Luckily, it’s an aspect of the ruleset that can be tweaked to one’s heart’s content.

What seems to be missing

Actually, ‘missing’ may not be the right term here, but the rules dedicated to cavalry do strike me as a little bit funny. They are very detailed and a lot of space is dedicated to charges, formations and so on… but they all seem to be a carry-over from ‘General de Brigade’ and as we all know, the role of cavalry was very different in ACW from that during Napoleonic Wars. And so, I find it peculiar that cavalry charges are dealt with in detail, but behavior of dismounted cavalry is barely touched upon. This oversight was starkly illustrated in my game, where Union troopers were charged by Confederate infantry. This situation isn’t even considered in melee rules - charge and melee procedures between infantry/artillery on both sides and cavalry as charging party are described in detail, but there is nothing about charges against dismounted cavalry troopers. A slight gap in otherwise solid ruleset, but annoying nonetheless.

As already said in my reaction immediately after the inaugural game, my initial impression of ‘Guns at Gettysburg’ was very positive. The ruleset is comprehensible and detailed, but didn’t get in the way of the game flow. Some glitches did occur, but nothing major. One thing that I liked very much was in the formating of the ruleset - on a couple of occasions I needed an answer to some very specific questions and every time I found a clearly labeled section dedicated specifically to that aspect of the game. On the other hand, lack of printed number pages in the ruleset is seriously annoying.

Part two in my ‘Soviet Period’–Mig 3 from Zvezda

Allright, just as an interruption in ongoing series about my latest ACW game and ‘Guns at Gettysburg’, here’s my latest modelling effort – Mig-3 from Zvezda. I could claim that it was a quick and dirty build, without much effort put into it… except it took me more than six week to glue on the antenna and put the canopy in place. Anyway, here’s a couple of pictures of what turned out to be a basic, but nifty little kit. 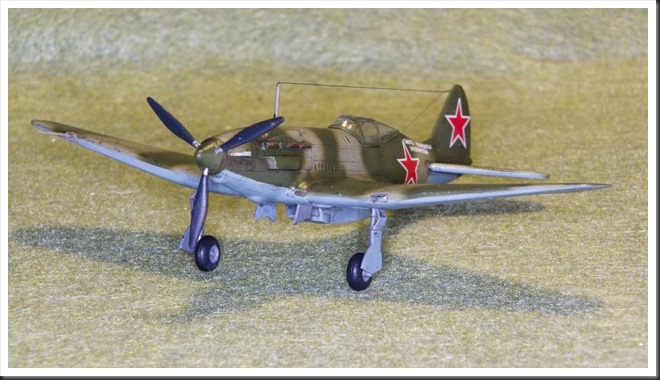 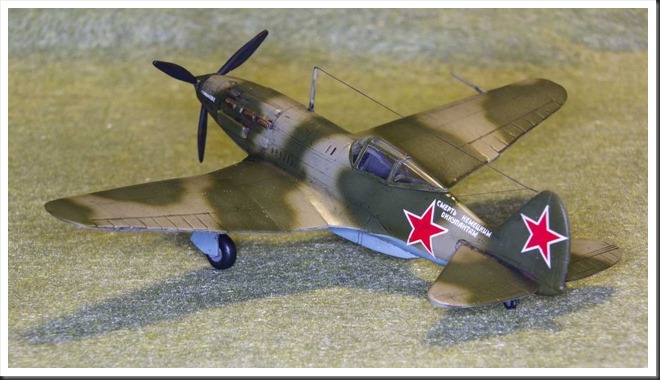 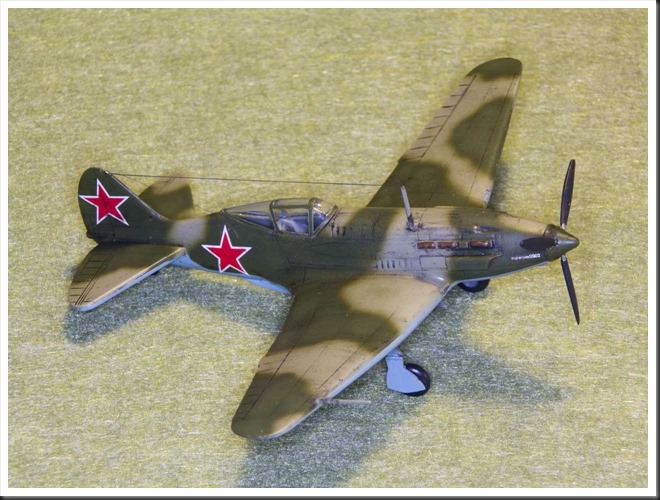 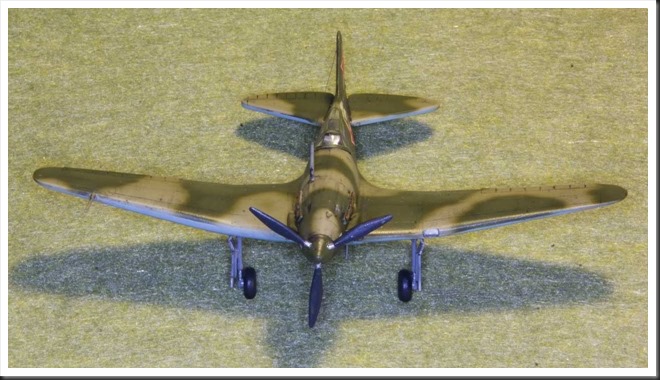 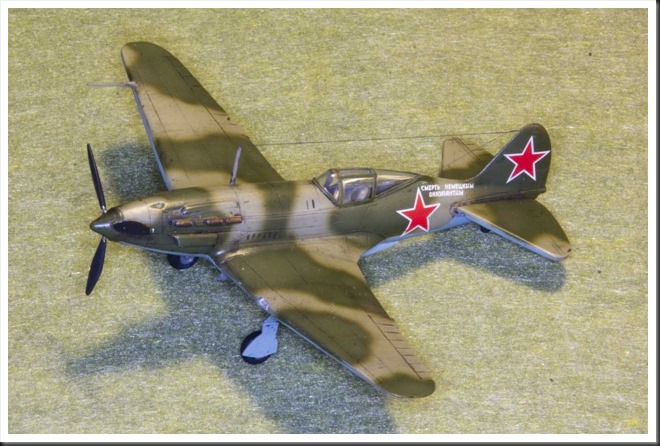 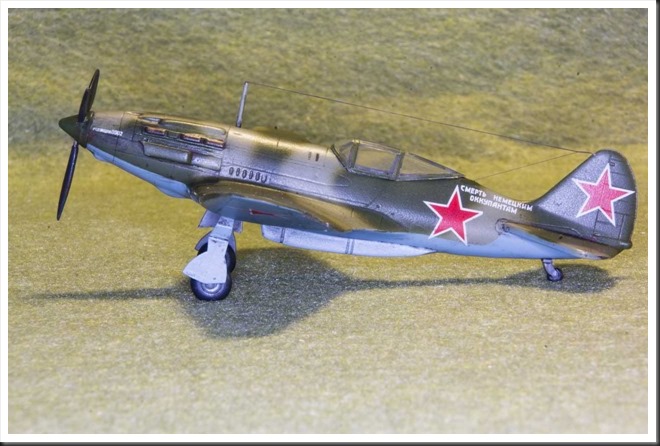 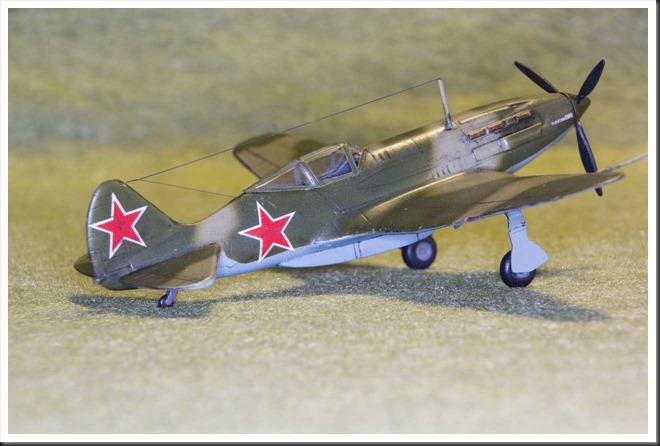