Britannia is still a part of the empire.

After a brief interlude over the French skies, let's now return to my WAB project. Or rather, let's go back to the start of it. As I mentioned before, a buddy of mine and I - under the inspiration of Cornwell's 'Warlord' trilogy - decided to start collecting armies from 'Age of Arthur'. My friend choose the Saxons, while I (once again succumbing to my strange love to anything called 'imperial'), choose to defend the civilization and set my heart on a Romano-British army.

As a starting point for my army I selected a milites unit from Gripping Beast's extensive selection of miniatures from this period. I must say that I am very happy with my choice - figures are very nicely sculpted, don't require a lot of cleaning up and are a joy to paint.

I had some difficulty in deciding about how I would paint my milites. In the end I've reasoned that it would be highly improbable that any regular units would be available on the Isles during that period and painted each figure differently. I tried however to give the unit a 'Byzantine' look. Also, I've limited my mix of shield transfers to just a couple of schemes. All in all I am quite pleased with my first foray into 28mm 'scale'. 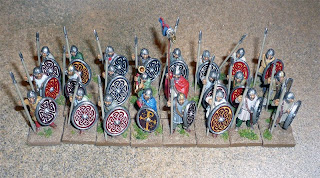 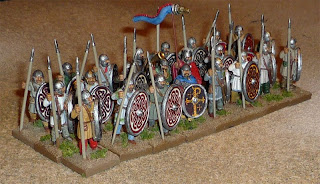 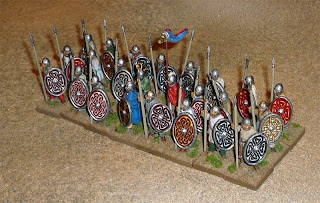