So… more than a year after the decision to start our ‘Age of Arthur’-project, H. and I decided it was time to run our first trial game. The fact that H. had only three finished units against five of mine didn’t bother us – we wanted to get those miniatures out, give them a workout, roll some dices and have a few laughs.

Perhaps a little more serious problem was the fact that last time I had the opportunity to read the rules was… oh, a year ago or something like that. As for the army lists and pre-game preparation – since number of units was so uneven, neither of us bothered with those small details. That’s what the supplements are for!

It will come hardly as a suprise to most of you that our first game was something of a fiasco. Most of the time was spent on trying to find relevant rules, checking stats and similar ‘fun’ activities. By the time we had to start packing up (game took place at local game shop, after opening hours), we did manage to kill one skirmisher and have a successful Saxon cavalry charge, which ended in a draw. This “high watermark” was rather suitable finale of the game.

It has to be said, despite equal fumbling on both sides, we still somehow managed to have a blast. At the same time I think it will be best if we try to avoid games like that and for that reason I have this checklist to complete before next meeting.

On a side note, even the pictures from the game didn’t work out all that great (starting to be annoyed by my point and shoot, it’s time to get a simple DSL kit). Not that it’s stopping me from posting some pictures anyway. :-) 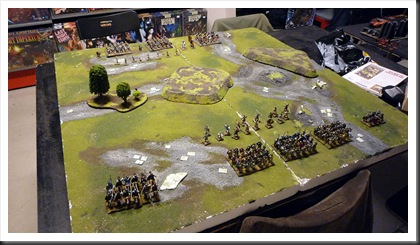 Saxons on the far edge, Romano-British on the near edge 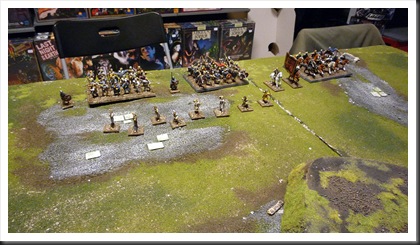 Saxon army – two units of foot Duguth,
Duguth on ponies and some skirmishers 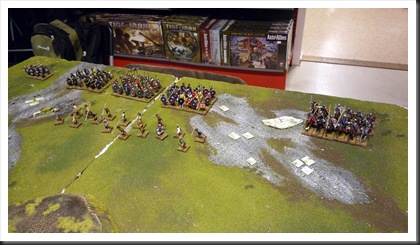 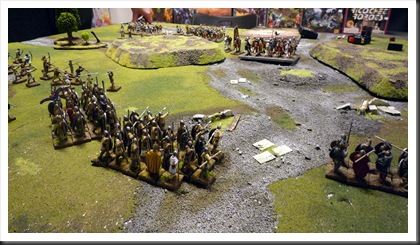 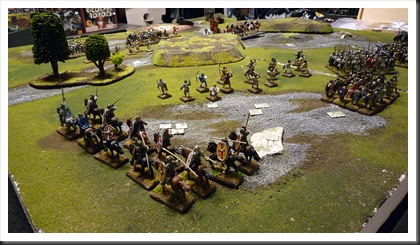 Commitates try a sneaky flank manover that led to nowhere 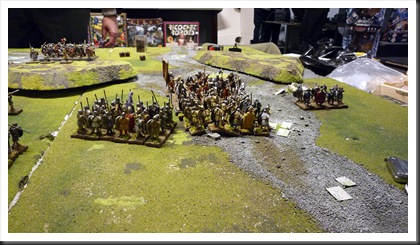 Saxons smash into milites and get stuck

Over two weeks has passed since DFF CON 2009 and it’s about time for me to post couple of words about the show. Let me start with thanking the guys at Dansk Figurspilsforening for an excellent event. Even though I was one of those that arranged a game, my participation was minimal when compared with all the effort that went into all the background work. My participation in Saturday’s games was unfortunately limited to the game I was hosting. I run a slightly modified version of ‘Check Your Six’ scenario called ‘Jolly Good Show’, which I’ve already wrote about in one of my previous posts. The fun thing about this scenario is its replayability – this time around, British players, with help of proper tactics and a huge dose of luck, managed to down four bombers and damage another two for a loss of a single Hurricane. The amazing thing was that they managed to do all that in a single pass through the German formation.

What’s even more important, the scenario was played by a total of six players, five of which never played CY6 before. After three rounds they were ‘self-going’ and, if I am allowed to draw conclusions from the comments, had a really good time. 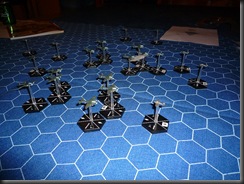 On Sunday it was my turn to have some fun. First of all, I’ve managed to get my first taste of ‘Fields of Glory’… finally. Couple of the guys at the club are very active with the ruleset and put up a simple 600 points demonstration game with Republican Romans and Phyrric Greeks. Things went according to the plan – Phyrrus’ elephants created mayhem on one of my flanks, cavalry danced around on the other, and in the middle Roman legions gave the Greeks a bloody nose… or at least they were in process of, because we had to finish just as things got interesting (some blokes needed the table :-( ).

Even though my first game was untimely interrupted, the rules set gave me a very positive impression. It is rather complex and the game itself takes its time, but the game mechanics do look sound and I had fun while playing. This first impression was rather important to me, as I am in the middle of painting a rather large Greek army.

Next on the schedule was a naval action with ‘Fleet Action Imminent’. It was great game - two British battlecruisers exploded and another managed to get shot to pieces… unfortunately, I was on the British side, so I won’t write much more about that event. :-) However, despite bearing witness to a small British disaster, I have to say that ‘FAI’ is growing on me. Simple, quick to learn and yet manages to deliver realistic results – that’s the kind of ruleset that I like to play these days.

All in all, more than 10 hours gaming time over a weekend, it’s been a long time since the last time that happened. Already looking forward to DFF CON 2010.

Couple of snapshots of some of the other DFF CON 2010 games. 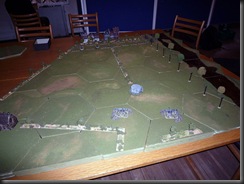 Start setup for an I Ain’t Been Shot Yet, Mom’ game. 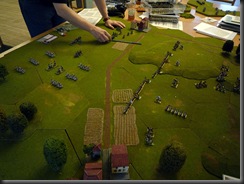 Demonstration game of ‘From Valmy To Waterloo’…
WITH THE AUTHOR OF THE RULESET! :-)