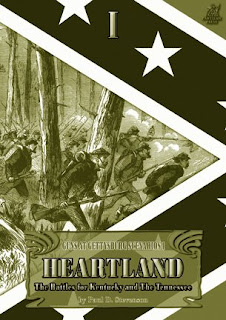 Some time ago, Partizan Press released their ruleset for American Civil War, called “Guns at Gettysburg”. Shortly thereafter came the first scenario book for the system, called “Heartland – The Battles for Kentucky and Tennessee”. Since I am something of a compulsive collector in regard of scenario books, I couldn’t resist the temptation and ordered it almost immediately after it became available.

As it is implied by the title, focus of this book is put on the struggle for control of Kentucky and Tennessee during the early stages of the war. Engagements in the book take place between November 7th 1861 to October 8th. Each scenario consists of a short description of general situation before the battle, scenario objectives, detailed orders of battle on regimental level (including number of figures per regiment and classification of the leaders/units according to “Guns of Gettysburg”), a map and several paragraphs describing the events during the real battle and its aftermatch.

This one strikes me as perfect beginner scenario for two players that are just starting with the period or a ruleset. I plan to use it in my next game with ‘They Couldn’t Hit an Elephant’.

Logan’s Cross Roads (19th January 1862) – medium size scenario. Union side includes ten regiments of infantry and four small batteries. They are opposed by equal number of Confederate regiments and artillery, but the Rebels also have three small regiments of cavalry.

This one looks to me like a foregone conclusion, but I’m the sucker for last stands and will be setting it up as soon as I make some field fortifications for the fort.

Interesting scenario, but one which will put some demands on my terrain supplies. Lot of field fortifications is needed to play this one.

Fortunately the terrain isn’t very complicated. If you have enough miniatures, this one could be a great weekend game.

This one seems really easy to set up for a quick afternoon game.

Munfordville (14th September 1862) – small scenario where three Union regiments aided by some skirmishers, token force of cavalry and a single battery try to hold strong fortified position. On the opposing side are six infantry regiments, two cavalry regiments and two batteries of artillery.

Another scenario requiring a lot of fortification terrain pieces, including a blockhouse.

Hilly terrain and lots of woods should make this scenario very interesting and re-playable.

Battery Robinett (4th October 1862) – medium size scenario dealing with one of main events during battle of Corinth. Union is on the defense here with eight infantry regiments supporting six entrenched batteries of artillery. Confederates field equal number of infantry regiments and are supported by two batteries.

Another scenario where one side is entrenched, making special demands on terrain setup.

Setup for this scenario is quite original and I think it may have a lot of replayability.

This scenario definitely caught my interest because of relatively uncomplicated terrain setup and variable entry times for most of the units. I think there is a lot of potential for total chaos in this one and that’s my favorite type of scenarios.

In contrast to two previous scenarios, this is a classic set-piece assault on formed infantry line. However, terrain layout produces some interesting problems for both sides.

Invasion - a theoretical scenario with chess-like qualities. Both sides command equal forces of six infantry regiments, two cavalry regimens, and two batteries of artillery and have to achieve similar objectives. Terrain is a mirror image of itself along a diagonal line. This one seems to be a perfect choice for a tournament scenario, if such were ever played within ACW setting.

In addition to the scenarios, Partizan Press took the opportunity to include couple of pages of extra rules for ‘Guns of Gettysburg’. This fact alone should make this scenario book a must buy for players that use that ruleset. At the same time I must add that “Heartland” can be used without any problems with any regimental ACW ruleset, since figure ratios are provided in the book. Additionally, conversion table for Johnny Reb 2 should make it particularly easy to use “Heartland” for players that still play this classic ruleset.

What about scenarios then? I hope that my short synopsis gives a pretty clear view of the content – most scenarios have OOB’s hoovering around eight infantry units per side, which means that they are playable during an afternoon. Also, there is a lot of variety in the character of the scenarios and I do believe that everyone will be able to find at least a couple of scenarios that will catch their interest. At the same time I need to point out that five of the scenarios require fortifications of one sort or another, so you better have those walls and abatis pieces ready.

Two minor negative remarks: as far as I could see, there are no instruction in regard of the table size. While I assume that the scenarios are to be played on a 4’ by 3’ table, it would be nice if it was clearly stated somewhere in the text. Also, there are some typesetting errors in several of the OOB tables – misaligned rows that can cause a little consternation.

Regardless of that, I think that “Heartland” is an excellent scenario book and can recommend it to anyone interested in the period. Considering moderate size of most of the scenarios, I also think that it is a rather good starting point for people that are just beginning to assemble their ACW armies.
Upplagd av Minondas