And so, finally, the day of the first outing for my newly painted Saxons have arrived.

With H.’s offensive on kingdom of Rhegis having slowed down to snail pace, L. decided to see if his tribe wouldn’t have better luck a bit further south, in kingdom of Caer Gynntguic. With his bunch being freshly painted and this being his outing with Dux Britaniarum rules, I decided to keep things simple and let him lead a basic raid on a village. The Saxon goal in this scenario is quite simple – run into individual the village, search the houses, find the loot on a roll of a six, grab the loot, run back home. Oh yes… try not to get killed in the process, but that’s optional. For Britons the objective is also pretty straightforward – kill’em all. 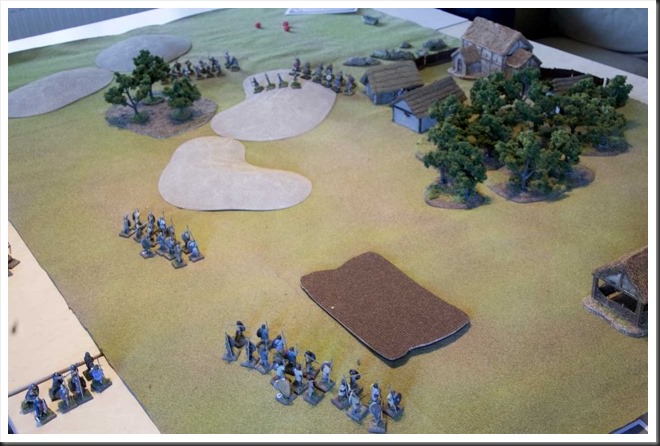 L.’s entry point in this scenario was from the far edge of the table. He was lucky enough to get three rounds of movement before my troops arrived on the table, unlucky to find out once I got there, I had all of my troops with me. This fact must have influenced his thinking, as only one group of warriors and a leader was sent into the village in search of the ‘treasure’, potentially slowing down his ‘search for treasure’ rate. Remainder of his raiding party – two units of hearthguard, two units of warriors and the bowmen – set course straight for my guys. 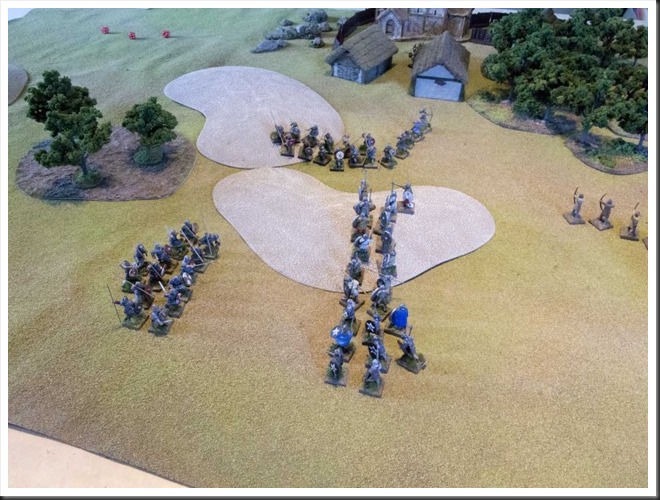 Just a couple of rounds into the game, the lines were drawn in the sand, traditional greetings in form of insults about relatives and personal hygene were exchanged… and a bit of a crisis materialized for my Britons. As can be seen in the picture, I was a bit too eager to get into contact with L.s hearthguard and exposed my flank to his other group of warriors. L. didn’t fail to notice my predicament and did actually try to smash into my exposed flank, but his dice roll for movement turned out to be inadequate for the task. His failure with the movement dice roll allowed me to bring up my peasant levies, grouped in a single large formation. By pure luck, I managed to avoid a potential disaster.

A quick clarification is necessary at this point – as it turns out, I had a truely crappy ‘photo day’ during this game and vast majority of pictures taken during the game have turned out to be unuseable. Because of that fact, the most vital part of this game has to be narrated without any visual aids.

Basically, what happened was this – L., tempted by a good set of Fate cards, smashed his hearthguard into the shieldwall in front of them. He ignored my commanipulares on the left flank and focused his effort on my warriors in center and the right. It was a pretty even and prolonged fight in which L. managed to break my warrior group on the right flank. In the end though, the Shock points mounted up for him and his front rank broke rank and fled. Remainder of his hearthguard gave it one more try, but it wasn’t enough. Once his chief was wounded, they followed the example of their comrades and withdrew in orderly fashion.

His two units of warriors engaged my other shieldwall, consisting entirely of peasant levies. Surprisingly, here the fight was rather onesided – both sides suffered some casualties, but the Shock caused the Saxons to break contact almost instantly after first clash of arms. 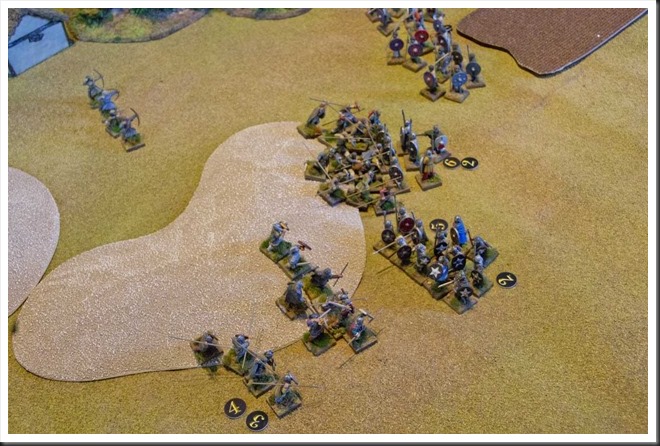 The picture above shows the situation after these dramatic events. L., unwilling to give up, charged the British warrior group that broke rank in fight with his hearthguard with what remained of his own warriors and actually managed to put them to flight. This success exposed them however to an assault by my peasants, who managed to maul them rather badly. 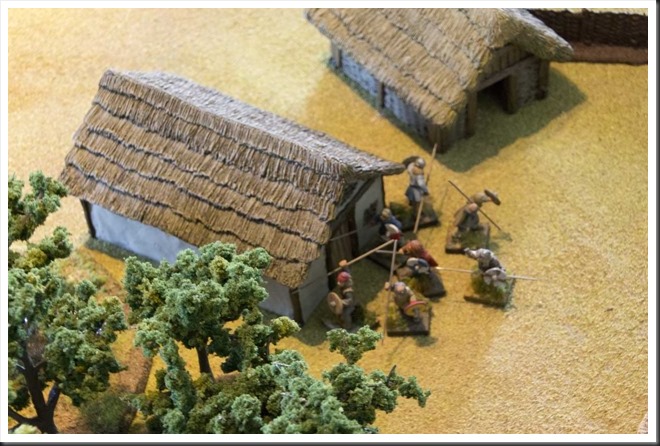 Meanwhile, L’s raiders in the village searched freneticaly for anything worth bringing back home. House after house was ransacked, but nothing even remotely shiney could be found. 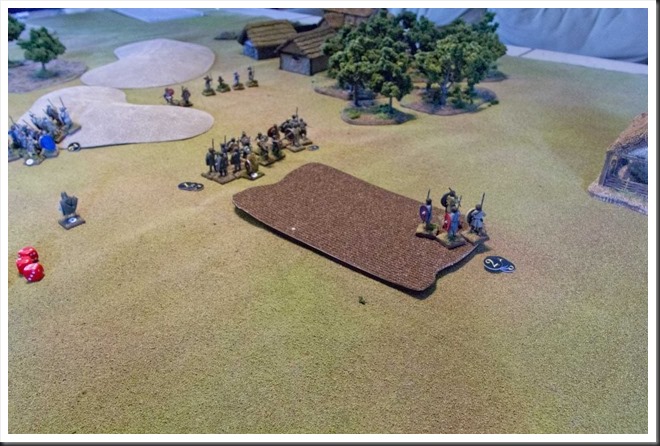 With his hearthguard catching a breath at safe distance from what remained of my ‘main’ shieldwall and his search in the village turning up nothing of value, L. made a rather surprising decision to make one final attempt to break my levies. With just four warriors, he smashed in the middle of their shieldwall and actually managed to split it in two. This was however the high watermark of his effort – what remained of my peasants turned onto his warriors like mad dogs, or, at least they did so in my imagination. To be truthfull though, they didn’t manage to do much damage. They did however manage to convince L. about general unhealthiness of his current situation. His Saxons came to sensible conclusion it was best to break contact. 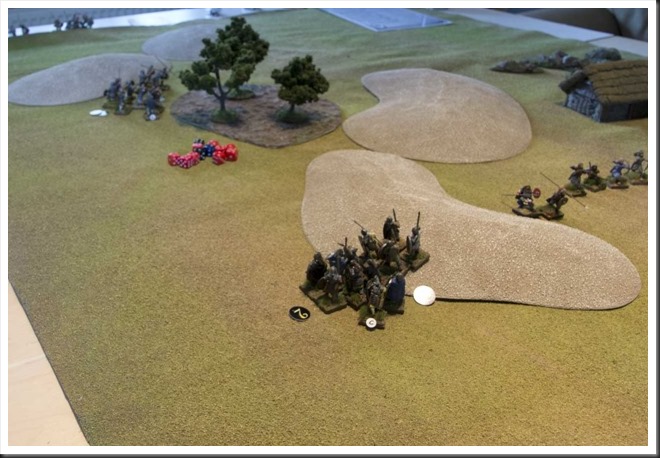 At this time the game was at a rather peculiar stage. Both L. and I did loose a formation of warriors. L’s hearthguard had a shedload of Shock points to deal with, but was otherwise still combat-worthy (one of his groups lost three men, the other was untouched). L. also had one completely fresh Warrior group in the village. From my perspective, the situation wasn’t that rosy neither. My peasant levy was still alive, but pretty much in shambles. My commanipulares didn’t suffer any casualties, but they were now supported only by a single group of four warriors; these guys would not stand for long if L. decided to attack. In other words, this fight was far from over!

But… as so often is the case in our hobby, real life clock and exhaustion took over. We’ve been at it for almost five hours and L. made the sensible decision to call it a day despite the fact that he didn’t manage to find anything of value in the village.

Musings after the battle

Let’s start with the obvious – the Saxons, newly painted as they were, never really had a chance in this game. The old wargaming truism has been proven yet again!

If I am to be serious though, this game of ours was quite fascinating for me for two reasons. First of all, it was rather entertaining to see how different playing styles of H. and L. shaped the course of the game in very different ways. With H., I can usually assume that the Saxons will act cautiously and, for the lack of better word, rationally. L. explained to me later that he wanted to explore the ruleset and therefore acted consciously much more aggresively, seaching for a fight wherever it could be found. Thus, he took risks I’ve never experienced in my games with H. It has to be said that these risks did pay dividents, most important of them being the fact that he managed to split my levy shield wall with just four warriors accompanied by a leader.

Which brings me to the second reason this game was also a valuable learning experience. In Dux Britaniarum, a formation can be created by groups of warriors being formed either side by side or in two ranks, one behind the other. If a formation consists of two groups, they can be formed like this:

The difference between these two setups is that side by side groups always take equal shares of potential hits, while in ‘one rank behind the other’ setup the front rank absorbs all hits until their number dwindles to less than half of their comrades in rear rank. Then they shift place.

In our game, I played with groups side by side, L. set up his formations in two ranks. This was new experience, because H. usually preferred same setup as I did.

Why do I mention this? Well, for the first time, I had the opportunity to see the real differences in these two formation variants and they do add some surprising complexity to the ruleset. The advantage of the ‘side by side’ formations is that all involved groups support each other by division of possible hits. But this also means that all groups accumulate the Shock points, not necessarily at equal rate. It seems that one of the groups will always be ‘unlucky’ and accumulate more shock points than everybody else. In the end this will result in their rout, which in turn will split the formation into smaller components.

‘Two ranks’ formation seems to have their own set of pros and cons. As only the front rank absorbs all the hits, their comrades at the back are ‘protected’, at least at the beginning of an engagement. But the almost ‘manipular’ possibility to switch positions once casualties start to mount up seems to me rather unlikely – rather, the front rank wil suffer casualties and shock points and at critical point they just as likely break instantly, leaving their buddies to face the opponent all on their own. This is what happened in case of L’s hearthguard’s attack – his front rank took all shock points and by the time they lost half of their numbers, it was too much for them and they run away.

My point with this rather too long ‘analysis’ is that there are hidden depths in this deceptively simple set of alternatives for formation setup and I’m not sure how to deal with them. Further games seem to be necessary to explore this topic further!