So… by the time L. and I decided to temporarily cease the hostilities, the situation on the battlefield was, seen from the French side, as follows:

When we picked up the game couple of days later, L. set a time limit of two hours (more on that later). During those two hours we managed in rather brisk tempo to get through five game rounds, which in itself was rather impressive, considering the fact that in the initial session we got through six rounds in five hours. Conclusion – GdeB is not the most rapid of rulesets, but once you get a grip of it, the pace increases significantly.

Of course, the five rounds we played through would be even more impressive, if we actually managed to achieve anything substantial during their course! Instead, we had to endure one of the most anti-climactic and non-eventful game session I can remember.

So what happened? Well, yours truly bears most of the responsibility. There were times when I as a spectator was amazed over how unimaginative some players are when they find themselves stuck in the middle of the crisis on the tabletop; this time around it was my turn to give general Mack run for the money. But hey, I do have an excuse! You know, the usual one – my dice was broken and refused to roll anything higher than 4 throughout the evening!

During the interlude I had plenty of opportunity to study the situation on the battlefield (after all, why not take opportunity of the fact that it’s smack in the middle of my living room

) and decided to concentrate on ejection of Austrians from Oberlachling. Once it was taken,  I intended to commence general assault on their second line on the heights.

First setback of the evening came almost as soon as we resumed the game – it was then that I discovered that those two battalions that were in range for assault on Oberlachling…weren’t. So that round was wasted on a final march toward the village. In next round another horrid realization stopped the assault cold in its tracks – this time around I discovered there was no commander in range to give the order for French assault. Brigade commander was chased of with the battalion that was previously routed by Austrian cavalry and my CinC was busy picking his nose at a some distant location. So another round went by, this time on getting my commanding officers in right positions, while 1200 French infantrymen some hundred meters in front of Oberlachling wondered when the show would get on the road.

In round three everything was finally ready for the assault that the rest of French army was waiting for. Officers issued necessary commands, drummer boys started to hammer signals, scattered voices shouted ‘Vive le Emperor’… and nothing happened – I failed morale check for both battalions, turning them into hesitant, uncontrollable mobs (or as the condition is known in GdeB terms, they ‘Faltered’). It would take all of next round to sort that mess out and let’s not forget – during all that time, half of Austrian line battalion continuously poured musket fire into hapless French ranks. 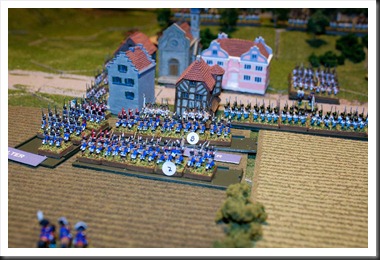 By that time L’s Cheval-Légeres recovered from their glorious charge and that fact seemed to reinvigorate L., who up to that point was suitably passive (he was supposed to be Austrian general after all!). He pushed his cavalry forward one more time, ordered another battalion into Oberlachling and to make things even more interesting, gave orders to retake Unterlachling.

Allt this Austrian activity and my preparatory responses took the rest of remaining rounds by the time we reached our limit of two hours, only two of L’s orders were completed and, one must say, with mixed results. Oberlachling’s garrison was doubled doubled in size. The village has suddenly turned out to be a tough nut to crack for my two battalions, which by that time had sorted their formations, but were by rather mauled by original defenders of the village. Activities of L’s. Cheval-Légeres were less fortuitous – they impaled themselves on a square formed by their former victims, who now had their gruesome revenge. Austrian attempt to re-take Unterlachling was on its way and would have been launched in next round, if we continued to play. 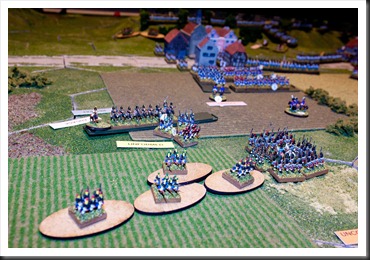 French infantry gets some payback 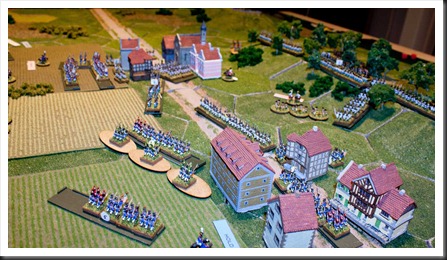 Inconclusive action at Unterlachling,
Austrian counter-assault moves toward the village 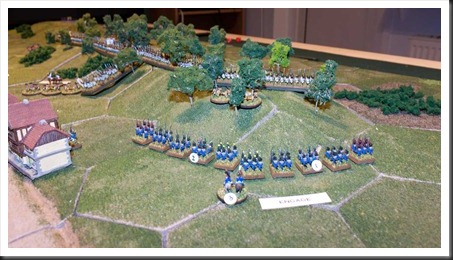 Alas, the two hours were up, the battlefield looked pretty much the same as at the start of the evening’s session and we had reached the end of yet another inconclusive game. Which leads us to the next part of this post with title…

What the heck is wrong with us?

I don’t know how things work in other wargamer communities, but in our group a typical game looks like this: we set up the game, we play for a couple of hours, one or two guys must leave early, if we’re lucky a breakthrough takes place somewhere in the lines, we extrapolate from that event what would happen if we continued the game, we pack up and go home. The funny thing is though that in nine times of ten, this “critical” breakthrough that made us quit isn’t really that critical at all, while the “defeated” army has plenty of reserves to recover from its setback and the game is most probably far from being decided, but folks had their fill for the day and want to go home. Perhaps I’m alone in this opinion, but I find games of that type more and more frustrating and unfulfilling. It is slightly incomprehensible to me that, considering the amount of time it takes to paint the figures and prepare the terrain, we can’t find the time and engagement necessary to actually “consume” the fruit of all preceding efforts.

Well, not this time. Like I mentioned before, the “battlefield” is in my living room and this time around I intend to play this game on my own until I have reached to the point where a decision has been reached.

Time to brag a little

I must admit that my painting pace has slackened over last month or so. One of main reasons is the fact that for some unexplainable reasons I decided to go back to modelling (no, it had nothing to do with this year’s C4 Open

) and a significant chunk of my leisure time was spent on a delightful little Spitfire from Airfix.

Now, airplane models in 1/72 scale aren’t the most practical things to use in wargaming, so this post doesn’t have much to do with the hobby per say. But it’s my blog and I am so damn pleased with how this little model came out that I can’t help but brag a little. I also have to say this – now that Airfix rose from the ashes of their decades long complacency, they have started to release some cracking little models! 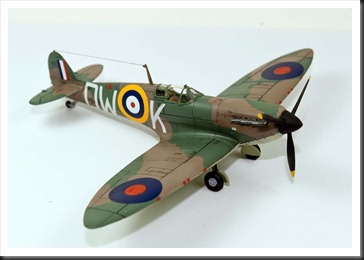 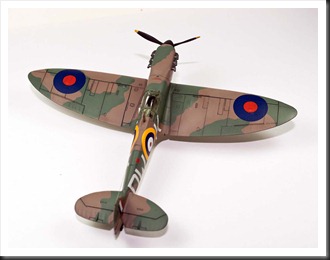 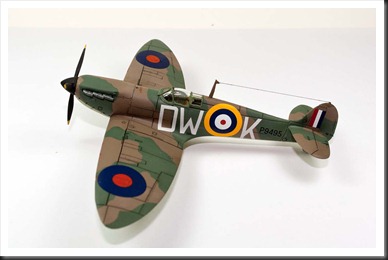 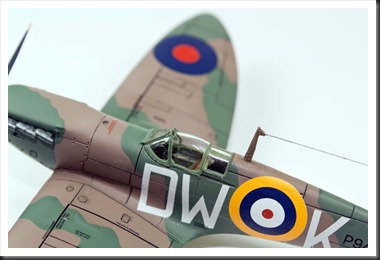 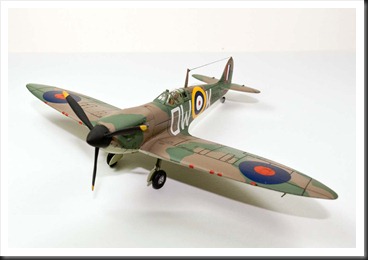 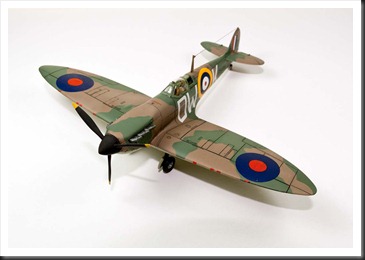 At the moment I’m sick like a dog and can’t really sleep, so I may just as well do something useful and post some more of the pictures from this year’s C4 Open. This time around, a bunch of pictures of airplane models that participated in competitions. My personal taste gravitates usually toward “small is beautiful”, but I have to admit that this year it was the huge and exquisitely finished P-38 Lightning in 1:32 scale that completely blew me away.