In search for perfect gladiatorial ruleset 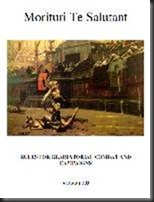 Some two years ago, tempted yet again by my chronic OLS-syndrome ('Oh, look... shiny!!') I impulsively bought a bunch of gladiator minis from Crusader miniatures. Of course the figures all by themselves, nice as they were, were pretty useless without a ruleset. And so, the hunt for yet another 'holy Grail' begun. In other words, I made a quick search on TMP and based on repeated recommendations of fellow wargamers, I decided that ' Morituri Te Salutant' is probably the best fit for my expectations. The fact that the ruleset is available as downloadable PDF from Black Hat Miniatures made the decision even easier- I'm a sucker for instant gratification of rulesets in PDF format.

Morituri Te Salutant (I will call it MTS from now in) covers single combat, combat with multiple participants, fights against animals and even the rather uncommon combat between mounted gladiators. It provides profiles for a grand total twelve gladiatorial types and four animals. In other words, whatever type of Roman festival tickles your fancy, you can recreate it with help of this ruleset.

Combat and movement mechanism - the obvious heart of a gladiatorial ruleset - may give an initial impression of complexity, but is in fact very simple. It uses hexagons for movement, facing, zones of control and ranges. Each gladiator type has a specific list of "moves" from which player can select his single action of the turn. Once everyone has secretly picked their action, it is time to decide the order in which gladiators will act in current turn. This is done based on the initiative for the turn, which is calculated individually for each participating figure. Initiative consists of three elements - basic initiative of the gladiator type (the heavier gladiator type, the lower initiative), initiative factor of selected action (which varies depending on complexity of the move and possible damage the move can cause) and finally a dice roll intended to add an element of randomness. In one vs. one combat, player with initiative can decide whether to go first or second, in combat with multiple participants, the sequence follows the initiative order.

Actual combat is resolved in two steps. First, provided that the opponents are in range, selected moves are checked against each other on a combat matrix. Some moves will cancel each other out with no possibility for damage, while other will provide one of the combatants with an opportunity to strike a damaging blow. On occasions where both combatants have a chance to hurt the opponent, the gladiator with higher initiative gets to strike his blow first.

There is a total of fourteen attack types (not counting those available only to the animals), so there is a lot of variation. Tactical flexibility is added by the fact that most "moves" also have an alternative, which can be switched to if the original selection is disadvantageous or simply doesn't make sense. Also, selection of some moves can prohibit selection of other moves in following turn.

If combat matrix indicates that a damage can be achieved on an opponent, the actual effect is determined by a roll of a D20. Selection of the "move", armor (there are four degrees ranging from unarmored to heavily armored) and condition of the opponent (for example down on the ground or stunned) dictates the difficulty of the strike and how severe damage the damage will be, if the attacker strikes true. The higher the dice roll, the more damage is inflicted by the successful attack.
Damage model is rather nifty. If a blow is finds its mark, the resulting injury can be of five different degrees of severity: stun, nick, cut, wound and a immediately mortal blow. Severity of that last one is self-explanatory, stuns are temporary, the remaining three render the recipient successively less effective - for example his initiative may be lowered or it may become more difficult for him to strike a blow.  Depending on state of the gladiator and severity of damage, there is also an increasing chance for him falling down to the ground.

It is worth pointing out that there are no hit locations in MTS. Instead, different types of damage are cumulative - three nicks result in one cut, three cuts render one wound, three wounds kill the hapless victim. In other words, if a player feels especially cruel, he can dispatch his opponent through 'death by thousand cuts'... or more precisely 'death by nine nicks'.

Beside the basic rules covering the combat, the ruleset covers all the aspects of gladiatorial combat, such as begging the crowd for mercy, possibility to trip over bodies of other combatants, fumbling and dropping/picking up equipment from the ground.

The most important "add-on" consists of a truly superb set of campaign rules, which allows the players to run their own gladiatorial school. Campaign game provides a very nice setting for the fights - gladiators that manage to survive gain experience and special skills and most successful can become very formidable beasts indeed. Furthermore, a campaign adds a rather ingenious economical aspect to the game, which makes it important not only to win the fights, but also to profit from them. Betting on individual fights and trading gladiators is not only all allowed, but encouraged.

How does it really work?

On paper,  MTS offers me everything I could ever wish for from a gladiatorial ruleset. In practice, my experience turned out to be of somewhat mixed variety. So far, I've made two attempts at running a campaign with two friends of mine. Both of them run out of steam after first session. The meta-game aspects work brilliantly - it is great fun to judge chances of one's own gladiators in different bouts and decide whether to participate or wait for better chance. I imagine that this part of the game becomes even more entertaining if the campaign gains momentum, thus allowing some gladiators to become more skilled, valuable and perhaps most importantly, treasured favorites of their "owners". I would also imagine that this part of the game only becomes better with higher number of participants.

Unfortunately, the "fighting" part of the ruleset had so far failed to impress me. My main issue is connected to the randomness of the combat system. With its wide selection of attack moves and interesting features such as different move "speeds" influencing the initiative or possibility to switch to an alternate action, one would expect that a player who'd taken time to learn the finesses of the system should gain an advantage. The games I've participated in have so far failed to support this expectation and left me with the impression that despite all of its finesses, combat system of MTS is in essence an advanced variant of 'rock, paper, scissors'-game combined with a dice rolling element.

Based on my admittedly limited experience, fights in MTS seem to come in three different variants. Some fights end abruptly with clean thrust through the heart of one of the gladiators. Other games can dragon and on, with neither of the combatants being able to make even a scratch on the his opponent. Most often though, the fights developed in easily recognizable pattern, with some random nicks rendering one of participants less effective, which in turn, sooner or later gave his opponent a chance to score a disabling blow.  The key word in all cases is "random" - as far as I could see, there was very little skill involved in gaining the advantage, it was the lucky dice roll that decided who gained the upper hand.

Thumb up or thumb down?

I must admit that MTS didn't live up to my rather high expectations. On one hand it is a marvelously complete and imaginative ruleset, covering wide variety of gladiator types and providing a superb campaign setting for the fights in the arena. On the other hand, I can't say that I am overjoyed with its combat system relying to such high degree on pure, dumb luck. It may very well be the fatal flow that will finally make me dump MTS into the paper bin... but not just yet. The reason for my reluctance of abandoning it is quite simple - despite my critique, it is still the best gladiatorial ruleset I have found so far.