After using ‘They Couldn’t Hit an Elephant’ exclusively for my ACW games for last couple of years, taking the plunge and trying out another ruleset wasn’t an easy decision. At the same time, as I mentioned in my post about the re-fight of the action at Shiloh Church, I’ve reached to a point where I was ready to try something new. Thus, enter ‘Black Powder’.

‘Black Powder’ has been around for couple of years now and I’m sure that it has been reviewed and analysed to pieces on other sites. Therefore, it hardly needs an additional introduction here. Instead, I’ll try identify its pros and cons in a comparison with ‘TCHAE’.

The game
Since the primary purpose of the game was to give ‘Black Powder’ a good work-out, I put together a fictional scenario with one side acting as numerically inferior defender holding excellent defensive position. The attacker, enjoying almost double numerical superiority, would be challenged not only by the opponent holding high ground, but also by quite rotten terrain – woods, gullies, a stream, swamps and build up areas. In other words, I took out all my terrain and tried my best to put together the nastiest possible terrain configuration allowed by my collection.

In tests of this type, I don’t care much about victory conditions, but for the sake of argument I arbitrarily decreed that all three hills in possession of the attacker would gain him a decisive victory, two hills granted minor victory, anything else was a defeat.

L., having graciously accepted the command of the attacking Confederate force, started out of board. His brigades were to enter in succession along the two two roads crossing the field of battle. It took but a couple of rounds for one important fact to dawn on us - the importance of command ratings of individual brigade commanders revealed itself. Commander activation in ‘Black Powder’ is based a roll of 2D6 against officer’s command rating, with the goal of rolling equal to or below that value. Dice result equal to or one below command rating allow single activation of units, while better results allow up to three activations. As it turns out, I decided to give all commanders rating of 7, which in practice means about 50 per cent chance of success… which in turn is quite similar to the success rate of unit activation in TCHAE with single ‘Tea Break’ card in the deck (if it’s played long enough

). Thus, somewhat ironically, the initial phase of the game reminded starkly of what both L. and I was used to see on the ‘TCHAE battlefield’ – Confederate advance was slow and spasmodic. Nature of the terrain that the rebels had to negotiate didn’t make things easier for L’s sluggish advance.

Over the course of the game, difficult terrain combined with rather mixed success rate of L’s activation rolls caused his units to become spread out along the roads and hinterland. This more or less negated the advantage of his superior numbers. At the time his foremost regiments finally came into contact with opposition, they were unsupported. Nevertheless, L. chose not to waste any time and he threw his regiments against my centre and right flank without any delay. Long range fire of my light artillery batteries was more or less ineffective, which was encouraging for this course of action. However, as soon as L.’s rebels came into small arms range, they became quickly embroiled in intense firefights and more often than not, disrupted by increasingly effective fire of Union troops. After a couple of rounds, as the effect of this two-way fusillade  started to take its toll, another conclusion could be drawn about ‘Black Powder’ – it doesn’t take much to simply blow away complete regiments in this game, especially if one enjoys a bit of luck as I did at that moment.

Following sequence repeated itself in both places where L. attempted to close on my position – as his foremost regiments came into range of my small arms, they deployed into line and engaged the enemy while remaining regiments attempted to deploy on their flanks. Unfortunately, L’s front regiment was invariably opposed by two of my own regiments and supporting artillery, which at that range became rather more effective. Ensuing firefights resulted on all occasions in either a throwbacks or complete destruction of confederate regiments. Compared with TCHAE where individual regiments are usually very resilient and can at least initially withstand being battered by superior numbers, units of regimental size in games governed by ‘Black Powder’ seem to be more brittle and give way much quicker.

Having realised that fact, L. subsequently exercised a bit more patience, which paid off couple of turns later when he mounted successful charge against my position on the big hill in the centre. The result was something of a mixed bag – I lost an artillery battery which auto-broke (!!!) and my line was pushed back. This feat did however cost L. another regiment shot to pieces and removed of the table.

This rebel charge was the high point of the game. We did continue for a couple more rounds, but with L.s continued bad luck in his activation rolls for brigades on his right and Union troops executing a veritable massacre on his disorganized troops attempting to cross the stream on the left, we decided to break off the engagement at at that time. 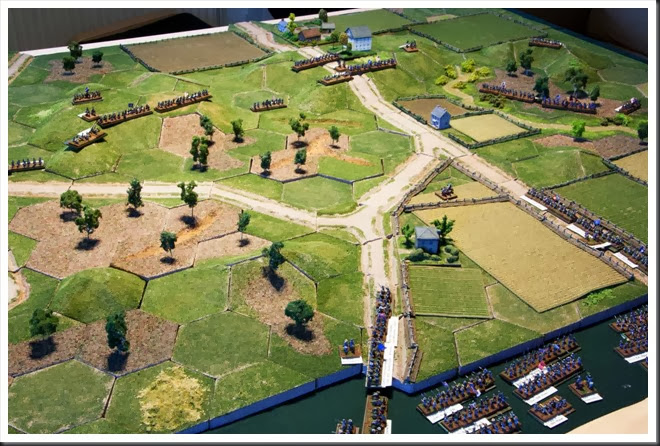 Start of the game 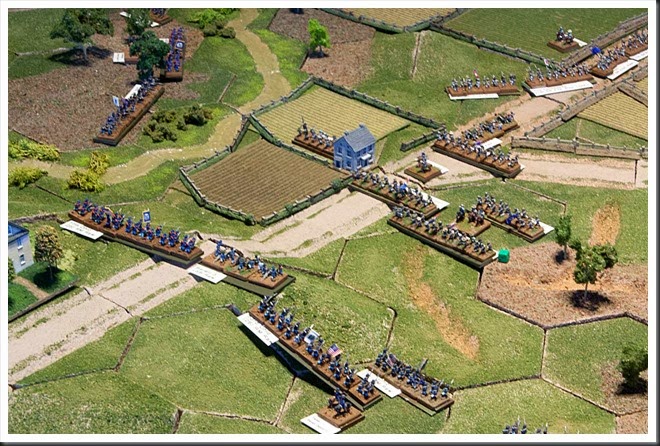 Confederate troops preparing to charge centre of Union line. A fumble by Rebel CinC delayed this action by couple of rounds. 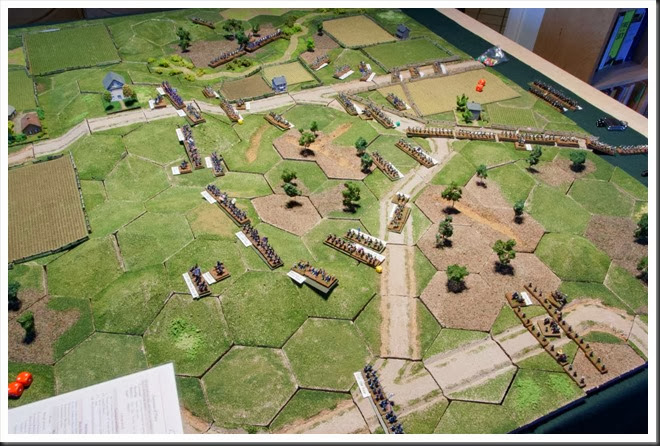 Situation in the middle of the game – disjointed attacks by Rebels at different points of Union line, all defeated by concentrated firepower. 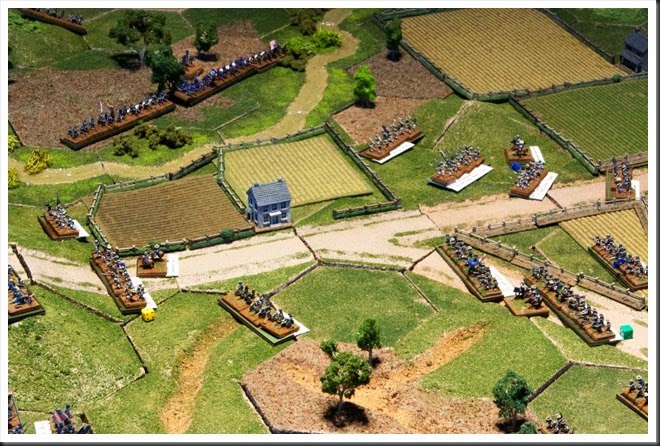 Throughout the game, Federal troops on the left flank poured in salvo after salvo into the flank of Confederates in the centre. Rebel attempt to carry their position was disjointed and easily repulsed as individual regiments were thrown into disarray and repulsed by accurate rifle fire. 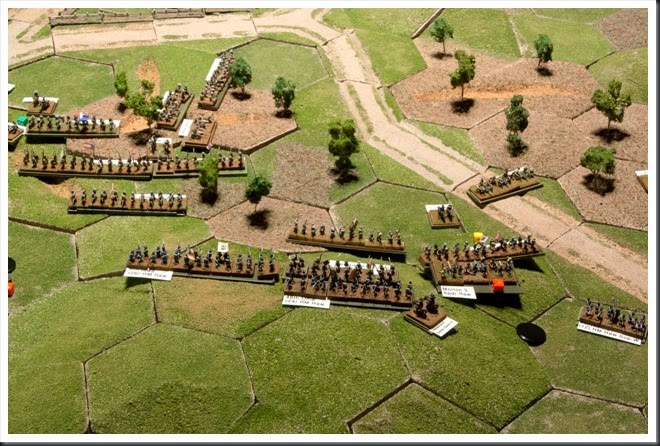 Climax of the game – brave rebel charge up the middle hill.

Musings after the battle
Even based on this single trial game, it is safe to say that ‘Black Powder’ is a completely different animal than ‘TCHAE’. The most prominent difference lies of course in the fact that ‘TCHAE’ is hard-wired for a American Civil War. ‘Black Powder’ on the other hand is obviously something of a toolbox, a Jack all trades, trying to cover long time-span and conflicts of different nature. The toolbox aspect of this ruleset is perhaps most evident in its command&control system relying on 2D6 rolls against command rating of individual brigade commanders. In this game all our commanders had a rating of 7; a simple adjustment of this one variable to 8 increases the chance of brigade activations from around 50 percent to close to 75 percent – a difference which would most probably provide a game with completely different tempo.

Another difference between TCHAE and Black Powder can be found in how the two rulesets treat individual regiments. Once again, the morale, behaviour, movement rates, formations, equipment of regiments in TCHAE are tailored for ACW and only for ACW. ‘Black Powder’ on the other hand is far more generic, with basic ‘out of the box’ units being rather bland and undistinguishable from each other. The ‘flavour’ of a particular conflict is added to them with help of by around 30 optional special rules. Those rules can be “bolted on” to individual units giving the units special abilities alternatively handicapping them in varied ways and making them more ‘true’ for the period or even individual battle. In our game we had a bit of fun and rolled a D6 for each individual unit. On a roll of 6 the controlling player was allowed to select one characteristic for the unit, on a roll of 1 the opponent had that pleasure. The effects of our choices on the battlefield were quite amusing on a couple of occasions. I think that this feature of “Black Powder”, when treated a bit more seriously, can provide a bit of entertainment all in its own right; finding the right combination of characteristics for a particular period or specific battle could be quite a challenge.

The most obvious difference between TCHAE and Black Powder is easily identifiable – individual regiments are in Black Powder infinitely more fragile than in TCHAE. Not only do they seem to break quicker, but when they can break in a blink of the eye. In TCHAE, the commander has plenty of time to spot and react to a crisis. In Black Powder a gaping hole in the line can appear due to a single bad dice roll. This difference is in my opinion very important and will probably take a while for me to get used to. I also dare to say that because of this characteristic, Black Powder will render very different games than TCHAE. I suspect that once command rating of the leaders is increased to 8 or even to 9, the games with ‘Black Powder’ will be significantly quicker and much more dramatic than TCHAE games. This means being able to play even large games to a conclusion in a single evening, something that so far has been a rarity in my wargaming ‘career’. On the other hand, I can’t help but worry that these potentially fast and furious games won’t have much in common with historical ACW battles , which more often than not were slow grinding affairs.

In other words… further testing is required and will take place in near future!