One of my favorite figure manufacturers is Adler Miniatures. However, I always find it a bit disappointing that there are so few published pictures on their site. So, just to give a lending hand, here is a picture of my next step toward French OOB for my first General De Brigade scenario - French foot artillery 6/8 pound battery, code FBAT1, in their original bare metal condition.

Pictures of painted figures will be posted when I'm done, whenever that may be. 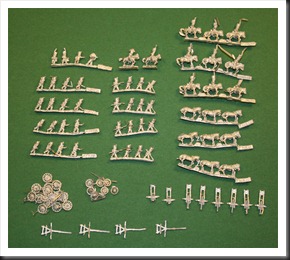 My Stukas didn't have long to wait until their combat debut - just a couple of hours ago we run a simplified version of scenario "Dogfight over Convoy BOSOM" from scenario book “Over The Channel” with four of my friends. Since we had one completely new player, I decided to remove certain elements of the scenario, most significantly clouds and spotting rules.

"Dogfight over Convoy BOSSOM" is a very neat little scenario for 2 to 4 players. German side runs a pair of Me-110:s and Me-109:s escorting ten Stukas. RAF is represented by a flight of Spitfires and Hurricanes. This scenario is also quite interesting from the tactical perspective - British planes can deploy in a perfect position for a head-on pass against Stukas, while German fighters are hindered from engaging British fighters until they fire. However, after first salvo, British players have some decisive decisions to make - do they make another pass against Stukas or do they act defensively and counter the German escorts?

Our game followed the by now quite familiar script (I’ve actually played this scenario once before in Copenhagen, with remarkably similar results). The critical first fire phase from British players was quite ineffective (only one Stuka damaged). To add insult to injury, one of Hurricanes run out of ammo almost immediately and left the engagement in a hurry. Spitfire flight then turned around to get the Stukas from behind, while Hurricanes continued straight forward, gaining altitude at the same time. Results of those maneuvers were predictable - Spitfires gained perfect position for attack against the Stukas and managed to damage three of them. Unfortunately, they were by now unsupported and exposed to German escorts, which shot down two of Spitfires (the “stunner” of the game consisted of the fact that it took four very potent hits from Messershmidts to down one of the Spits). By round six, three British planes were opposed by four German escorts in advantageous position and we decided that it was time to call it a day. 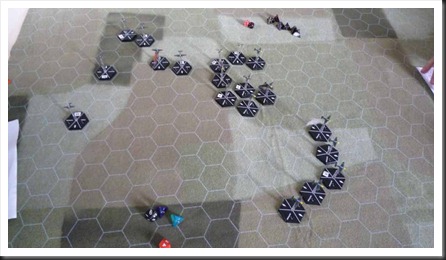 Situation in the middle of our game – front group of Stukas are out of harm’s way, while Spitfires are hammering the second group of bombers from behind, while being hammered by the escorts.

Conclusion of this game is once again that trying to gain 6 o'clock position against bombers, while ignoring their escorts is a suicidal proposition. Attacking side must instead keep maximum speed and either engage the escorts in a head on contest (unhealthy proposition for the British because of 20mm cannons of Messerschmitts) or try to position themselves in a position for a deflection shot against the bombers several turns later in the game.

Just a short post to keep the blogg alive – just finished a batch of Stukas and they deserve a photo opportunity. Miniatures are from Tumbling Dice, decals are from Dom’s Decals.

Paint scheme is simplified cammo for 1940 period – upper surfaces are painted with Valejo Olive Grey 888 and Bronze Green 897, lower surfaces are painted with Valejo Pale Blue 906. In 1/600 scale differences between two shades of green are almost invisible, so I choose to lighten Olive Grey with a healthy dose of dull yellow (any kind will do, as long as it’s not some sort of bright lemon shade). 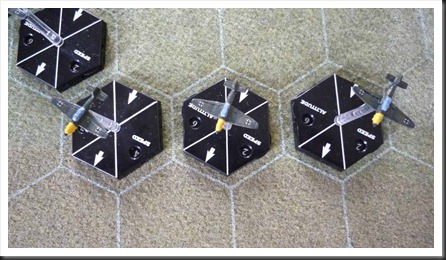 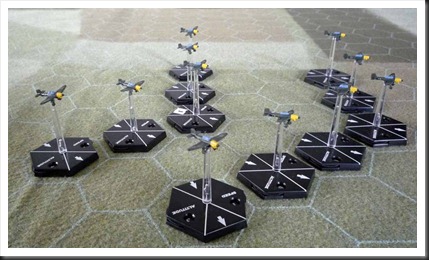