I was a little taken aback as I’ve just looked up the publication date of my post about that very first jungle terrain piece – May 2013, where the heck does the time go? In any case, when I was finally finished with first batches of opposing forces for my Vietnam project, there was no more excuses; it was time for jungle ‘mass production’. And now, with 10+ pieces under my belt, I thought it would be nice to post some additional thoughts about that part of the project.

So first things first… I think I will need somewhere between 25 and 40 pieces of terrain to be able to cover playing area available to me (a square 1.5 x 1.5 meters). Since I really dislike making terrain (simply not my cup of tea), trying to make all of them at once would with all probability end up with me walking away. Fully aware of it, I decided to split the job into more manageable batches of 5-6 pieces at a time.

The process for each batch became obvious for me while working with the test piece. First, painting and texturing of the bases. As already described, a mix of rough gravel, sand, cat litter and dried herbs give me the rough texture  I imagine is suitable for jungle pieces. It is spread onto a thick coat of brown paint and sealed with another once dry. Next a bit of drybrushing with lighter tone of base coat colour and we’re ready to proceed to step two.

By the way, ‘imagine’ is the operative word for this project, because I am most certainly not trying to re-create realistic Vietnam bush here. 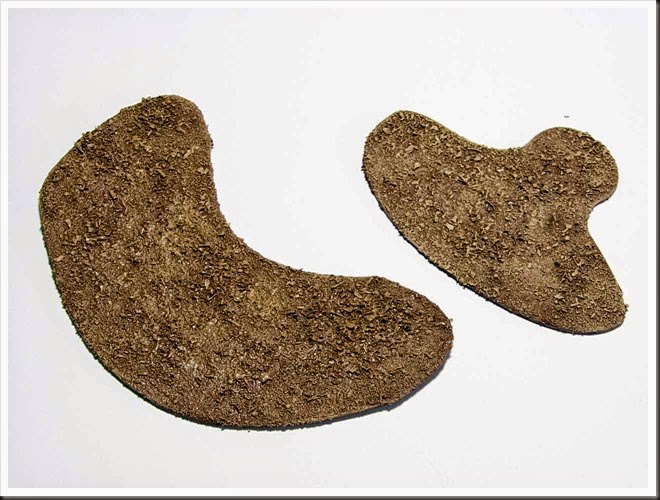 Next, it’s time for hot glue gun, plastic palms and whole bunch of different plastic aquarium plants. Couple of words about plastic plants – in my opinion the bigger variation, the better. My personal collection (mainly from Chinese E-bay shops, although IKEA was also helpful) consists by now of 10+ different plants and grasses and I wouldn’t hesitate to get even more of that stuff. Another thing one quickly realizes and needs to accept – most plastic plans are ‘too big’ for 15mm. Leafs are too long, too wide and too thick. So forget about realism if you’re going plastic plants route with that scale.

Last but not least… it is quite tempting to just squeeze in as much stuff on those bases as possible. That’s what I did with that test piece and it sure looks nice; it is also a bad idea, for two reasons. First and foremost, remember that you will need to have place for your miniatures somewhere on these pieces. Second, there really is no need for ‘thick vegetation’ unless you want some impassable terrain pieces; the visual impact of the jungle is created quite handily by multitude of bases and variety of plants. 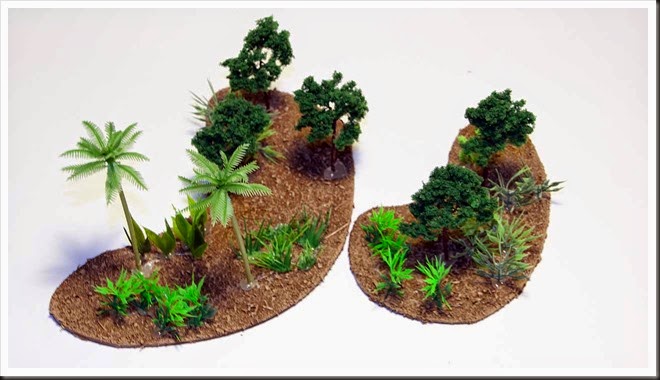 Once the plants are glued onto bases, the final step consists of cleanup/flocking. Why cleanup you ask? Well, because these hot glue blobs look bloody awful and need to be hidden somehow. Sponge flock works fine for that purpose, but my personal favourite is brown fine turf. I have several bags of that stuff (made by Woodland Scenics/Noch) and by pure coincidence their earth brown flock is almost the same colour as the paint I use for the bases. So all I need to do to hide those hot glue blobs is to paint them with diluted white glue and then sprinkle turf powder over the ‘wet spot’.

Flocking is done to my personal taste with help of a bunch of railroad modelling stuff – mainly Noch sponge flock and bush clump foliage as well as ‘normal’ foliage from Woodland Scenics. That last one is however anything but ‘normal’, at least not for me. It comes in form of thin sheets of flock stuck to a very thin web-like net and can be cut and teased into different shapes. Pretty useful stuff , both for ground-work as well as for tree foliage! 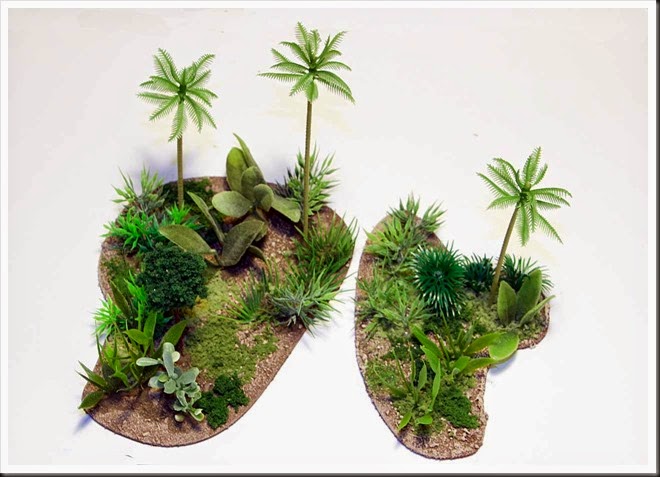 I’ve already said it before and am repeating it now – when it comes to groundwork materials such as flock, turf, clump foliage and similar, the railroad modelling stuff is the best and most cost effective. When compared with companies like Noch, Faller, Bush and Woodland scenics, prices demanded by most popular ‘wargaming terrain’ companies are simply ridiculous. Here in Sweden, the internet-based companies that sell whatever terrain modelling stuff your heart desire (except for decent palm trees) that I’d recommend based on personal experience are Modelljärnvägsspecialisten, Eurohobby and MJ Hobby.

OK, this is the last batch of pictures from this year’s local modelling exhibition. Next post will be wargames-related, I promise.