When in doubt, start a new project

To say that my wargaming has for a while now been placed in low priority department would be something of an understatement. Between rather hectic tempo at work, my re-kindled interest in proper model kit making and plain lack of enthusiasm, so far during 2013 I’ve barley managed to pick up a brush, much less to participate in a game.

I’m pretty sure that we all have those ‘low intensity’ spells. The question is what to do to get out of them. In this particular case, I’ve decided to give “new project”-method a go. After all, whatever I have on my plate at the moment (surprisingly short list, now that I think about it – some 6mm Napoleonics, couple of 1/600 airplanes for my flagging Check Your Six Battle of Britain project and couple of terrain hexagons for a Shiloh scenario setup that was supposed to be ready last year) obviously fails to attract my attention. And that’s why I’ve decided to take the plunge into Vietnam era.

Vietnam has always been a war that was very interesting to me and ever since Too Fat Lardies released ‘Charlie Don’t Surf’, the call of the sirens was almost irresistible. There was however one huge speedbump that until now always managed managed to stave my enthusiasm – jungle terrain. I’m a decent figure painter, but when it comes to terrain I’m not only quite inexperienced, I also don’t enjoy that part of the hobby all that much. Thus, jungle terrain always seemed beyond my skill as well as my attention span.

Nonetheless, over last couple of weeks I did a bit of research and convinced myself that I should give it a try. Getting the ruleset was the fist step. Next, I’ve ordered a bunch of palms and trees from some Chinese outfit on Ebay. They arrived at my doorstep couple of days ago and considering the price, they’re excellent. Today it was time to take the next step and find some additional vegetation – in other words a trip to IKEA was in order. Yepp, you read correctly, whenever you need something for your wargaming table, IKEA is the place to visit. After a bit of recon I found three types of fake plants that fit the bill. An added bonus consisted of the fact that just a stone throw from my local IKEA there is a huge shop with all sorts of garden plants, including fake ones. A quick visit there resulted in a great find - two rather odd looking balls of grass which look rather useful for my purpose. In total, five different types of shrubs and plants for less than 200SEK.

Now all I need to do is to figure out how to turn them into Ia Drang valley. 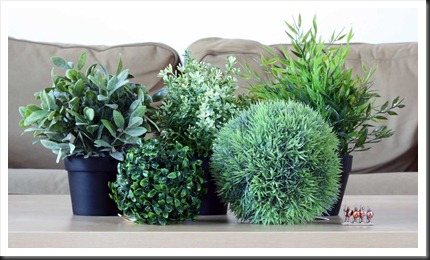